Thursday of the Second Week in Ordinary Time 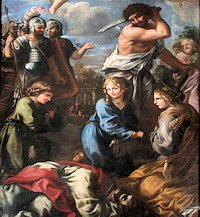 Alleluia Verse for Thursday of the Second Week in Ordinary Time, Cf. 2 Tim 1:10:

Our Savior Jesus Christ has destroyed death and brought life to light through the Gospel.

The Roman Martyrology commemorates Sts. Marius (Maris), Martha, Audifax, and Abachum (d. 270), a group of Persian martyrs of the third century who died for the faith in Rome.

Meditation: Patience and Union with God

Being convinced that it is only in so far as my works are united with the merits of Jesus Christ that they are satisfactory and meritorious, it follows that my great aim should be to unite myself as closely as possible with Jesus Christ and His sufferings in all my actions, and thus it would matter little what I am engaged at.

But how is this union to be effected?

St. Benedict tells us "We share in the sufferings of Christ by patience." This little sentence gave me a great light. The life of a saint must be one of great and mysterious sufferings. Patientia=Sufferentia.

"If anyone will come after Me, let him deny himself," says Jesus. This shows that it is suffering which draws us near to Jesus. "He who dos not take up his cross daily and follow Me, cannot be My disciple." Therefore all other methods which do not include this are founded on error.

Highlights and Things To Do: