Monday of the Twelfth Week in Ordinary Time 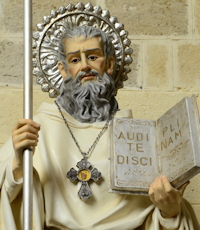 Twelfth Week in Ordinary Time: Grant, O Lord, that we may always revere and love your holy name, for you never deprive of your guidance those you set firm on the foundation of your love. Through our Lord Jesus Christ, your Son, who lives and reigns with you in the unity of the Holy Spirit, God, for ever and ever.

The word of God is living and effective, able to discern reflections and thoughts of the heart.

Today's Roman Martyrology commemorates St. John Matera (also John Pulsano) (1070-1139). St. John was a native of Matera, Italy and in his childhood longed to become a hermit. As a young man, he worked for a time as a shepherd in the service of a monastery. His exceptional austerity, however, was so irksome to the less fervent monks that he soon had to leave. Thereafter he journeyed from place to place as he strove to carry out God's will for him. At one point, acting upon a vision of Saint Peter he had experienced, John rebuilt a dilapidated church dedicated to the saint. Later, he traveled to Bari, where he preached with great efficacy. Certain individuals, motivated perhaps by jealousy, attacked the popular preacher with false charges of heresy, but he was in the end totally cleared of their accusations. Eventually John founded a Benedictine monastery at Pulsano and became its first abbot.

St. Margareta Ebner (1291-1351) is also commemorated today. She was a Dominican nun at the Maria Medingen monastery near Dillingen, is one of the most important representatives of 14th century German female mysticism. She fell seriously ill in 1312 and was sick and bedridden all her life. She formed a deep spiritual friendship with the mystic Heinrich von Nördlingen (ca. 1310-1387), whom she met in 1332, with the long correspondence between them constituting the first preserved German-language collection of letters.


St. John of Matera
St. John was born toward the end of the 11th century at Matera, a town in the Kingdom of Naples. On reaching adulthood, he joined a monastery on the island of Taranto. His single-mindedness in keeping the Rule created problems for the others monks and led John to leave. Seeking a monastery that would fit his makeup, the Saint went to Calabria and then to Sicily. In his quest he returned to the mainland at Ginosa. He rebuilt a church nearby dedicated to St. Peter. 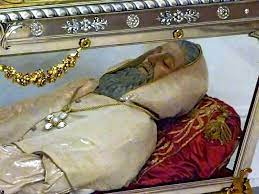 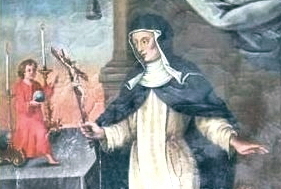 Margaret's spirituality as almost entirely Christocentric and was profoundly influenced by the cycle of the liturgical year. One of her favorite invocations (which shows also her sense of Dominican identity) was: "Jesus, pure Truth, teach me the truth." Among her writings are her Spiritual Journal or autobiography, and also a treatise on the Lord's Prayer. She died on June 20, 1351, and she was beatified by Pope John Paul II on February 24, 1979.Recent years have seen a real surge of interest and publications on Bl. Margaret Ebner and the Rhineland mystics, the most notable being Margaret Ebner: Major Works, edited by Leonard Hindsley (Paulist Press, 1993). Several interesting articles on Margaret and her fellow Rhineland mystics can be found on-line, including "Life in Abundance: Meister Eckhart and the German Dominican Mystics of the the Century: The Importance of Dominican Sisters in German Mysticism" by Gundolf M. Gieraths, O.P. (Spirituality Today, 1986) and "Dominican Spirituality in the Rhineland."—Excerpted from the Dominican Monastery of Our Lady of the RosaryThings to Do:
Find us on Social Media.