Thursday of the Sixth Week in Ordinary Time; Optional Memorial of the Seven Holy Founders of the Servite Order 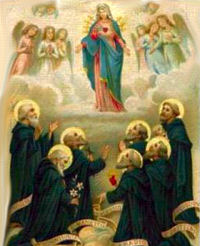 Sixth Week in Ordinary Time: O God, who teach us that you abide in hearts that are just and true, grant that we may be so fashioned by your grace as to become a dwelling pleasing to you. Through our Lord Jesus Christ, your Son, who lives and reigns with you in the unity of the Holy Spirit, God, for ever and ever.

Optional Memorial of Seven Holy Founders of the Servite Order: Impart to us, O Lord, in kindness the filial devotion with which the holy brothers venerated so devoutly the Mother of God and led your people to yourself. Through our Lord Jesus Christ, your Son, who lives and reigns with you in the unity of the Holy Spirit, God, for ever and ever.

Today the Roman Martyrology honors the Seven Holy Founders of the Servite Order (1233), seven noble Florentines who in the thirteenth century, at a time when Florence and all Italy was torn by civil strife, banded together to found, not far from Florence on Monte Senario, the Order of Servites of the Blessed Virgin Mary, especially dedicated to penance and meditation on the sorrows of our Lady in the passion of our Savior. This order was approved by the Holy See in 1304. One of the seven, Alexis Falconieri, died on this date in 1310. According to the previous calendar (1962) this feast is celebrated on February 12.

Seven Founders of the Orders of Servites

These seven men were the founders of the Servite Order, a community instituted for the special purpose of cultivating the spirit of penance and contemplating the passion of Christ and Mary's Seven Sorrows. Due to the spirit of humility cherished by the members of the Order, their accomplishments are not too widely known. But in the field of home missions great things are to their credit, and certainly they have benefited millions by arousing devotion to the Mother of Sorrows.

The Breviary tells us that in the midst of the party strife during the thirteenth century, God called seven men from the nobility of Florence. In the year 1233 they met and prayed together most fervently. The Blessed Mother appeared to each of them individually and urged them to begin a more perfect life. Disregarding birth and wealth, in sackcloth under shabby and well-worn clothing they withdrew to a small building in the country. It was September 8, selected so that they might begin to live a more holy life on the very day when the Mother of God began to live her holy life.

Soon after, when the seven were begging alms from door to door in the streets of Florence, they suddenly heard children's voices calling to them, "Servants of holy Mary." Among these children was St. Philip Benizi, then just five months old. Hereafter they were known by this name, first heard from the lips of children. In the course of time they retired into solitude on Monte Senario and gave themselves wholly to contemplation and penance. Leo XIII canonized the Holy Founders and introduced today's feast in 1888.

St. Theodore was a Christian soldier who set on fire the temple of the mother-goddess Cybele at Amasea (303 A.D.). The prefect of the legion promised mercy if he repented his act and renounced the Christian faith. Theodore persevered bravely; accordingly he was cast into prison and his flesh ripped by iron hooks so that his ribs were exposed. In the midst of indescribable torture he sang joyfully, "I will bless the Lord at all times; His praise will ever be in my mouth" (Ps. 33).

Praying and singing the glories of Christ, he was burned alive on November 9. A panegyric by St. Gregory of Nyssa on his virtues is extant. Theodore's head has been venerated at Cajeta since the Middle Ages. In ancient times, particularly among the Greeks, this soldier-martyr was honored as patron of armies. During the seventh century a church was dedicated to him in Rome, and his picture appears upon the apse mosaic in the church of Sts. Cosmas and Damian.