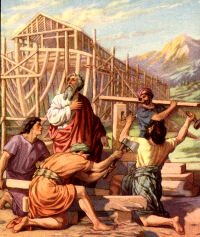 Prepare our hearts, we pray, O Lord our God, by your divine power, so that at the coming of Christ your Son we may be found worthy of the banquet of eternal life and merit to receive heavenly nourishment from his hands. Who lives and reigns with you in the unity of the Holy Spirit, God, for ever and ever.

Today is the feast of St. Charles Eugène de Foucauld, a French Catholic religious and priest, who lived among the Tuareg in the Sahara in Algeria. He was assassinated in 1916 outside the door of the fort he built for the protection of the Tuareg, and is a martyr. His inspiration and writings led to the founding of the Little Brothers of Jesus among other religious congregations. He was beatified on November 13, 2005 by Pope Benedict XVI, and canonized by Pope Francis on May 15, 2022.

Also included in the Roman Martyrology today is St. Eligius, French priest and bishop of Noyon and Tournai, who died in 660 AD.

On entering the court he fortified himself against its seductions by many austerities and continual ejaculatory prayers. He had a marvellous zeal for the redemption of captives, and for their deliverance would sell his jewels, his food, his clothes, and his very shoes, once by his prayers breaking their chains and opening their prisons. His great delight was in making rich shrines for relics.His striking virtue caused him, a layman and a goldsmith, to be made Bishop of Noyon, and his sanctity in this holy office was remarkable. He possessed the gifts of miracles and prophecy, and died in 665. —Excerpted from Lives of the Saints, by Alban Butler, Benziger Bros. ed. [1894] Patron: Horses, jockeys, veterinarians, craftspeople (of all trades), electricians, computer scientists, mechanics, miners, security guards, gas station workers, taxi cab drivers, farmers, servants, and coin collectorsThings to Do:
Find us on Social Media.