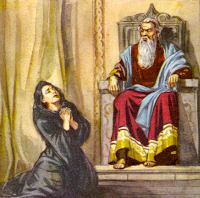 And James and John, the sons of Zeb'edee, came forward to him, and said to him, "Teacher, we want you to do for us whatever we ask of you." And he said to them, "What do you want me to do for you?" And they said to him, "Grant us to sit, one at your right hand and one at your left, in your glory." But Jesus said to them, "You do not know what you are asking. Are you able to drink the cup that I drink, or to be baptized with the baptism with which I am baptized?" (Mk 10:35-38).

Today is the feast of St. Ignatius of Antioch which is superseded by the Sunday Liturgy.Click here for commentary on the readings in the 1962 Roman Missal of St. John XXIII.

Sunday Readings
The First Reading is taken from the Book of the Prophet Isaiah, 53:10-11, and is the conclusion of the fourth Suffering Servant Song; Christ's divine gifts become our means to salvation.

Commentary on the Readings for the Twenty-First Sunday after Pentecost
"'Wicked servant! I forgave thee all the debt. . .Shouldst not thou also have had pity on thy fellow-servant" (Gospel)?

Life is indeed a warfare! Yet mercy must now be our weapon in dealing with others. Otherwise stern justice will be our eternal downfall (as symbolized by small figures at the right). Divine Mercy is angry with those who fail in mercy.The well-equipped Christian soldier must wear "the shield of faith,. . .the breastplate of justice,. . .the sword of the spirit," in "wrestling. . .against the world-rulers of . . .darkness" and their un-Christian blackouts (Epistle).O Christian woman, admire the ancient "valiant woman," Esther! By her confident prayer and strong virtue she saved herself and her people (Introit). O Christian man, behold the example of Job (Offertory). His faith never wavered until it was crowned in victory.--Excerpted from My Sunday Missal, Confraternity of the Precious Blood