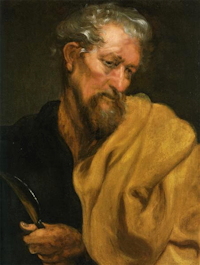 Strengthen in us, O Lord, the faith, by which the blessed Apostle Bartholomew clung wholeheartedly to your Son, and grant that through the help of his prayers your Church may become for all the nations the sacrament of salvation. Through our Lord Jesus Christ, your Son, who lives and reigns with you in the unity of the Holy Spirit, God, for ever and ever.

St. Bartholomew, a doctor in Jewish law, was a dear friend of St. Philip the Apostle. Because Bartholomew was a man "in whom there was no guile," his mind was open to the truth. He went willingly with Philip to see Christ and recognized the Savior immediately as the Son of God. After having received the gifts of the Holy Spirit on the first Pentecost, Bartholomew evangelized Asia Minor, northwestern India, and Greater Armenia. In the latter country, while preaching to idolaters, he was arrested and condemned to death.