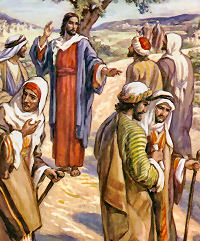 Jesus then said to the Twelve, "Do you also want to leave?" Simon Peter answered him, "Master, to whom shall we go? You have the words of eternal life. We have come to believe and are convinced that you are the Holy One of God (John 6:67-69)."

Today would normally be the feast of the Queenship of the Blessed Virgin Mary which is superseded by the Sunday Liturgy.Click here for commentary on the readings for the 1962 Roman Missal of St. John XXIII.

Sunday Readings
The first reading is taken from the Book of Joshua 24:1-2; 15-18 and concerns the general assembly of the tribes called by Joshua.

The second reading is from St. Paul's Letter to the Ephesians 5:21-32. In today's reading St. Paul sets up Christ's self-sacrifice for the Church as the model which all the members of the family should emulate in their mutual relations.The Gospel is from St. John 6:60-69. As we heard last Sunday, St. John was writing about the promise of the Blessed Eucharist at a time when Christians accepted the Mass and Holy Communion as the essential act of Christian worship. Very probably he omitted many details when describing this promise. The "disciples" who murmured evidently saw nothing but a man in Christ, It was very natural, therefore, that they could not accept his saying that they should eat his body and drink his blood. Thus it seems most probable that when Christ says they lacked "faith," he had given them sufficient proofs that he was more than a man. These individuals among the disciples, however, refused to open their minds to these proofs; therein was their guilt. Their minds were earth-bound and were determined to remain earth-bound. Faith is a gift of the Father, as Christ says to those disciples: "no one can come to me unless it is granted him by the Father," but the Father has offered them this gift and they have refused to accept it; otherwise they would not be guilty. No one who accepts Christ for what he is, the Son of God in human form, has any difficulty in believing that he left us himself in the Eucharist as a sacrifice and a sacrament. This does not mean that we understand this gift of Christ in all its details—it was an act of divine power and as such beyond full human comprehension. However, we can understand enough about the actuality of the Eucharist because we accept the words of Christ, who "has the words of eternal life," even though its innermost nature escapes us. We are doing no violence to our intelligence when we accept as fact from a trustworthy witness what we cannot prove or confirm for ourselves. No more trustworthy witness than Christ ever existed. In Galilee he promised to give his body and blood in the Eucharist—to be our spiritual nourishment — communion — and our means of offering an absolutely pleasing sacrifice to God every time his body and blood are made present by the words of his ordained minister. He fulfilled that promise at the Last Supper. He gave to his Apostles and their successors the power to repeat this act of divine love when he said: "Do this in memory of me." When Simon Peter answered Christ's challenge—"will you too go away?"—he spoke not only for his fellow-Apostles that day with: "Lord to whom shall we go? You have the words of eternal life." but for all Christians who really believe that Christ was the incarnate Son of God. Peter, be it noted, made his act of faith before he was fully convinced of the divinity of Christ, but he was already convinced that Christ was close to God and spoke nothing but the truth. We have the proofs of Christ's divinity which Peter and the Apostles later got. We have also the faith of two thousand years of the Christians whose belief in the Blessed Eucharist as a sacrifice and sacrament was at the very center of their Christian lives. We have also the noble example of many martyrs who gladly gave their lives in defense of this truth. Our faith may never be put to such an extreme test, but should it be, God grant that we will not be found wanting. Many of us may need to examine ourselves as regards the full and effective use we make of that gift. Every time we attend at Mass do we realize that Christ is offering himself to his Father for our sanctification and the sanctification of the world? Do we realize that we, through his minister at the altar, are offering infinite thanksgiving, infinite atonement, infinite adoration, infinitely effective petition, to our Father in heaven through the sacrifice of his divine Son in the Mass? Are we always worthy to act this part, are our consciences fit to allow us to partake of this sacrifice in Holy Communion? A true Christian who realizes and appreciates what the Son of God has done and is still doing for him will try always to make himself less unworthy, for not even the greatest saint was worthy to partake of this act of divine love. --Excerpted from The Sunday Readings by Fr. Kevin O'Sullivan, O.F.M.

Leprosy, dread disease, meant exile "afar off" as a castout from home and city. Mankind, rejecting Divine Life, became leprous, cast out from Eden here, from heaven hereafter.How amazing, then, that God should make a "covenant" with man as though he were His equal (Epistle)! What is this "covenant?" By it God bestows on all "those who believe" in Jesus the right to inherit His Life, promised to Abraham; not to those who look merely to "the Law" of Moses.Be not content, as were "the nine," with mere health of body but with the "increase of faith, hope and charity" (PRAYER). As with the lepers, so our prayer is: "Have regard, 0 Lord, to Thy covenant, and forsake not . . . Thy poor . . . (do not) cast us off" (Introit). --Excerpted from My Sunday Missal, Confraternity of the Precious Blood