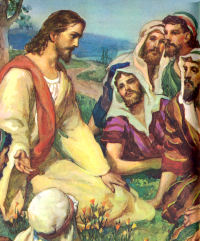 Today is the feast of St. Dominic which is superseded by the Sunday Liturgy.Click here for commentary on the readings from the 1962 Roman Missal.

Sunday Readings
The first reading is taken from the First Book of Kings 19:4-8 and gives us the story from the life of the prophet Elijah in which it is narrated that an angel fed him miraculously.

The second reading is from the Letter of St. Paul to the Ephesians 4:30, 5:2 in which he urges his converts to live in peace, harmony and love with one another.The Gospel is from St. John 6:41-51. The main point of doctrine in this part of our Lord's discourse, as given by St. John, is the necessity for belief in Christ who has come down from heaven. It is only in the last verse of today's text that Christ explicitly states that he is about to give his own very body as their spiritual food to those who believe in him. The description of himself as "bread from heaven" and the vital difference between the effect of this bread and the manna given to their fathers in the desert, are a definite preparation for the announcement of the doctrine of the Eucharist. However, before they could even think of accepting this teaching on the Eucharist they had first to accept Christ as divine, as the Son of God. This was not easy for Jews, for whom strict monotheism was the center of their faith. To admit that Christ was God would at first sight seem like admitting two gods. Secondly, even though Christ had worked extraordinary miracles, to all appearances he was still a mere man—and the prophets of old had worked miracles. True, Christ was evidently claiming to be more than a prophet; he claimed that he alone had seen the Father, that he had come from the Father. This claim of equality with the Father would be sheer blasphemy if it were not true; could God give the power of miracles to such a great sinner? Perhaps some of them argued along these lines and accepted his claim later on. Others remained stiff-necked and stubborn and could see nothing in him but a native of Nazareth, a humble Galilean like themselves, but one who had developed strange ideas about who and what he was. These Galileans began a long line of unbelievers which has stretched down through the centuries to our own day. The reasons for the unbelief are the same today as they were in the year 29 A.D. Man is proud of his intelligence; which he did not give to himself. Whatever he cannot grasp within the limited confines of that intellect, he treats as non-existent as far as he is concerned. If a God exists, a doubtful possibility to these great thinkers, we mortals can know nothing about him; he is beyond our ken and we can be of no concern to him. If there ever was a Jesus of Nazareth, he could be only a mere man who suffered from grave hallucinations! But his miracles? A simple answer: there never were any. His disciples invented these stories later. But these disciples were willing to die for these inventions of theirs! Thousands of Christians were martyred rather than deny the divine claims of Jesus! More hallucination, no doubt! Nineteen centuries of Christian history can be shrugged off as easily as that by those who will not believe. If certain statements do not fit in with preconceived ideas then these statements are false; if certain facts do not agree with history, as the unbelievers understand history, then these facts never happened. So man's limited, finite mind remains the sole judge and arbiter of all truth. We believe in a loving God, and in his divine Son, Jesus Christ, who came on earth to bring us to heaven, and in the Holy Spirit who completes the work of sanctification in us. Surely, we owe this Blessed Trinity a debt of gratitude! We can never fully repay it. Because of our Christian faith which has come to us from Jesus, we know where we came from, we know whither we are going and we know how to reach that destination. Of all the knowledge a human being can acquire on this earth, the above facts are the most essential and important. Any other knowledge is of temporary value. The knowledge our Christian faith gives us concerns eternity and our journey toward it. Today, we must thank God from the bottom of our hearts for giving us the Christian faith. This faith means that "God out of the abundance of his love, speaks to men as friends and lives among them so that he may invite and take them into fellowship with himself," as Vatican II puts it. He did not put us on earth and leave us on our own with nowhere to go except to the grave. He sent his beloved Son on earth. He made us heirs to heaven and left to us, in his Church, all the instruction and aids we need to reach our inheritance. The unbelievers and free-thinkers may feel that they are free to do what they will here on earth, but we know that we have been given the freedom of the children of God for all eternity, if only we live according to the faith given us.--Excerpted from The Sunday Readings by Fr. Kevin O'Sullivan, O.F.M.

May your ears tune in on God (symbolized by kneeling figures at left). May your tongue broadcast His Gospel (indicated by figure of "speaker" to the right), in the "holy place" of your parish activities, in the "house" of your family, among the "people" of your acquaintance (Introit).If we are "to hear" His Voice, we must go "aside from the crowd" at our Sunday Mass, for at least one uninterrupted hour. Only then, like the cured deaf-mute, shall we return and gladly "publish" the truth (Gospel).St. Paul relates how he received "the gospel"; how he then passed it on to others. "Hold it fast as I preached it to you" (Epistle).--Excerpted from My Sunday Missal, Confraternity of the Precious Blood