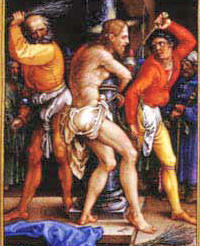 Friday of the Fifth Week of Lent: Pardon the offenses of your peoples, we pray, O Lord, and in your goodness set us free from the bonds of the sins we have committed in our weakness. Through our Lord Jesus Christ, your Son, who lives and reigns with you in the unity of the Holy Spirit, God, for ever and ever.

The formal feast of the Our Lady of Sorrows was originated by a provincial synod of Cologne in 1423. ... William Saunders, "... in 1482, the feast was officially placed in the Roman Missal under the title of Our Lady of Compassion, highlighting the great love our Blessed Mother displayed in suffering with her Son.According to the Roman Martyrology, today is the feast of St. Ludger, a missionary among the Frisians and Saxons, founder of Werden Abbey, and the first Bishop of Münster in Westphalia. He has been called the "Apostle of Saxony".Stational Church 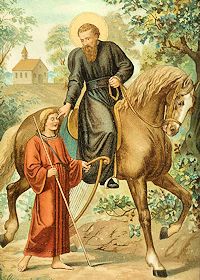 In 773 he returned home, and St. Gregory dying in 776, his successor, Alberic, compelled our Saint to receive the holy order of priesthood and employed him for several years in preaching the Word of God in Friesland, where he converted great numbers, founded several monasteries, and built many churches.The pagan Saxons ravaging the country, Ludger traveled to Rome to consult Pope Adrian II, what course to take, and what he thought God required of him. He then retired for three years and a half to Monte Casino, where he wore the habit of the Order and conformed to the practice of the rule during his stay, but made no religious vows.In 787, Charlemagne overcame the Saxons and conquered Friesland and the coast of the Germanic Ocean as far as Denmark. Ludger, hearing this, returned into East Friesland, where he converted the Saxons to the Faith, as he also did the province of Westphalia. He founded the monastery of Werden, twenty-nine miles from Cologne.In 802, Hildebald, Archbishop of Cologne, not regarding his strenuous resistance, ordained him Bishop of Munster. He joined in his diocese five cantons of Friesland which he had converted and also founded the monastery of Helmstad in the duchy of Brunswick.Being accused to the Emperor Charlemagne of wasting his income and neglecting the embellishment of churches, this prince ordered him to appear at court. The morning after his arrival the emperor's chamberlain brought him word that his attendance was required. The Saint, being then at his prayers, told the officer that he would follow him as soon as he had finished them. He was sent for three several times before he was ready, which the courtiers represented as contempt of his Majesty, and the emperor, with some emotion, asked him why he had made him wait so long, though he had sent for him so often. The bishop answered that though he had the most profound respect for his Majesty, yet God was infinitely above him; that whilst we are occupied with Him, it is our duty to forget everything else. This answer made such an impression on the emperor that he dismissed him with honor and disgraced his accusers.St. Ludger was favored with the gifts of miracles and prophecy. His last sickness, though violent, did not hinder him from continuing his functions to the very last day of his life, which was Passion Sunday, on which day he preached very early in the morning, said Mass towards nine, and preached again before night, foretelling to those that were about him that he should die the following night, and fixing upon the place in his monastery of Werden where he chose to be interred.He died accordingly on the 26th of March, at midnight.—Excerpted from Lives of the Saints, by Alban Butler, Benziger Bros. ed. [1894] Patron: Groningen, Deventer, East Frisia, Roman Catholic Diocese of Münster, Essen-WerdenThings to Do:

There is a temporary closure (2022), and currently the substitute Station Church is S. Maria della Vittoria (St. Mary of Victory).