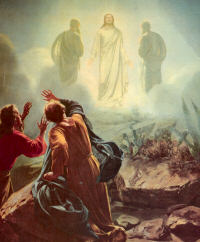 O God, who have commanded us to listen to your beloved Son, be pleased, we pray, to nourish us inwardly by your word, that, with spiritual sight made pure, we may rejoice to behold your glory. Through our Lord Jesus Christ, your Son, who lives and reigns with you in the unity of the Holy Spirit, God, for ever and ever.

Sunday Readings
The First Reading is taken from the book of Genesis 22:1-2, 9-13, 15-18. Abraham had promptly obeyed the true God and come to Canaan. Now God tests him by asking him to offer his son, Isaac, in sacrifice. Abraham obeyed promptly once more, but God intervened as Abraham got ready to slay his son. He renewed His promise of a great race, through which the whole world would receive the blessing of God — divine adoption throught the Incarnation.

The Second Reading is from the letter of St. Paul to the Romans 8:31-34. St. Paul is emphasizing the indwelling of the Spirit in Christians and their freedom from sin, eternal death and the Jewish law. The liberating act of Christ had made them children of God, destined for glory. 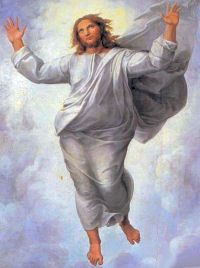 The Gospel is from St. Mark 9:2-10. This vision of Christ glorified, given to these Apostles on Mount Thabor (the traditional site of Transfiguration) was surely a very special privilege, and it was one they did not forget. "We saw his glory," St. John says in his gospel, written over sixty years later. In his epistles John also refers to this privilege (1 Jn. 1:1-4). St. Peter, writing from Rome to the churches in Asia Minor about thirty years later, mentions this outstanding experience: "For we were not following fictitious tales when we made known to you the power and coming of our Lord Jesus Christ, but we had been eyewitnesses of his majesty. For he received from God the Father honor and glory, when from out the majestic glory a voice came down to him saying: ‘this is my beloved Son in whom I am well pleased.’ And this voice we ourselves heard borne from heaven when we were with him on the holy mountain" (2 Pt. 1:16-18). Yes, the three Apostles were privileged and we too are sharers in their privilege. The Transfiguration of Christ is but one among many of the incontrovertible proofs of the divine Sonship of Christ which we have in the gospel narratives and in the twenty centuries-long history of the Church which he founded. Were he not divine, that Church would long since have crumbled and fallen under the many vicious assaults from outside which it has undergone, as well as from the many human weaknesses which have beset it from within. But Christ is God and the Church has his divine protection and assistance. Therefore, it will go on to the end of time to continue his work of elevating and redeeming mankind.This enlightening glimpse of Christ's future glory—a glory in which they would share—was given to these Apostles to strengthen and encourage them in the terrible test of their faith which the passion and death of Jesus would be for them very soon. It is for a similar reason that the Church orders this story of the Transfiguration to be read to us during this season of Lent. We are or should be mortifying ourselves during this season. This mortification can earn for us a glorious and unending future life. To encourage us to continue it, we are reminded that the One we are following, the One whose voice we listen to, is none other than the Son of God. There are the voices of many false prophets shouting around us, telling us to enjoy ourselves in this life, to "eat, sleep, drink and be merry for tomorrow we die," but there is the rub—tomorrow we shall die, but where shall we go then? Let us thank our divine Lord today, for giving this consoling and encouraging vision of his glory to his Apostles and through them to us. It was for them, and it is for us, a guarantee and a foretaste of the joys and the glory that will be ours for eternity, if we but persevere in our struggles against the world, the flesh and the devil. This struggle is not easy for our weak nature, but our loving Savior is ever beside us to "raise us up and tell us not to fear" if we but rely on him. When we are tempted to give way to our human weaknesses, or to give way under the weight of the crosses that sometimes are about to crush us, let us think of Mount Thabor, and the glorified Jesus, who a few weeks later faced his own real passion and cross cheerfully for our sakes. This thought will help us to carry our crosses as the thought of the future glory which will be ours should make us thank God that we have been created and thank his beloved Son for setting us on the road to that future glory. --Excerpted from The Sunday Readings by Fr. Kevin O'Sullivan, O.F.M.

Second Sunday of Lent, Station with Santa Maria in Domnica alla Navicella (St. Mary in Domnica):
The Station at Rome is in the church of St. Mary in Domnica, on Monte Celio. Tradition tells us that in this basilica was the diaconicum of which St. Lawrence had charge, and from which he distributed to the poor the alms of the Church.

Commentary for the Readings in the 1962 Roman Missal:
Second Sunday of Lent

"Behold, there appeared to them Moses and Elias talking together with Him" (Gospel).Last Sunday we beheld Jesus as Man, suffering and conquering the three temptations. Today a faint glimpse of Jesus as God is a further Lenten incentive against discouragement or failure.We behold Moses, the lawgiver, pointing to the code of the Ten Commandments; Elias, the prophet, pointing to the creed of Divine Truth. "This is the will of God. . .walking" in the way of His Commandments (Epistle, applying your mind to Divine Truth, so that "you (may) learn how to possess (your) vessel in holiness.""Your sanctification (Epistle) is an interior obligation in your own private life; also exterior (Prayer), to the extent of helping your neighbor, for "the Lord is the avenger" of deception in everyday business (Epistle).--Excerpted from My Sunday Missal, Confraternity of the Precious BloodProper for the Second Sunday in Lent.