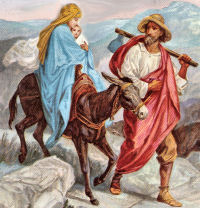 Previous Calendar: Sixth Day Within the Octave of the Nativity

December 30, Sixth Day in the Octave of Christmas - Day Six

God is your beatitude. The things of time are toys. You are eternity's child and your eternity has already begun! There is a compelling urgency to every day and every hour of the day. In it we are to witness to the truth — that God greeted and gifted us at Christmas.

If you know what witness means, you understand why God brings St. Stephen, St. John, and the Holy Innocents to the crib in the cave as soon as Christ is born liturgically. To be a witness is to be a martyr. Holy Mother Church wishes us to realize that we were born in baptism to become Christ — He who was the world's outstanding Martyr. — Love Does Such Things, by Rev. M. Raymond, O.C.S.O.