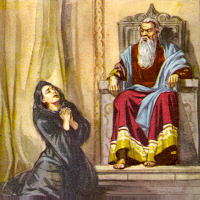 Notwithstanding the malicious intention the Pharisees had in putting this question to our Lord, they did us all a good turn by getting His answer. That answer is forceful and final. It lays down a norm which solves for all time the problems that can arise from our dual citizenship on this earth. Knowing their malice, Jesus said, "Why are you testing me, you hypocrites? Show me the coin that pays the census tax." Then they handed him the Roman coin. He said to them, "Whose image is this and whose inscription?" They replied, "Caesar's." At that He said to them, "Then repay to Caesar what belongs to Caesar and to God what belongs to God" (Mt 22:18-21).

The feast of St. Luke, which is ordinarily celebrated today, is superseded by the Sunday liturgy.Click here for commentary on the readings in the Extraordinary Form of the Roman Rite.

Sunday Readings
The first reading is taken from the Book of the Prophet Isaiah 45:1, 4-6. The prophet, second-Isaiah, who lived in Babylonia with the exiled Jews, tells us, in God's own words, that he is the God, not only of the Jews, but of history and of the whole world.

The second reading is from the first Letter of St. Paul to the Thessalonians 1:1-5b. St. Paul praises his converts for their fidelity to God and to Christ his Son and tells them how they are ever in his prayers so that they would continue to be faithful to the call God had given them, a call proved by the many gifts of the Holy Spirit bestowed on them.The Gospel is from Matthew 22:15-21. God's plan for man on earth was that he should live in the society of his fellowmen. Society must be governed, there must be authority which will direct the actions of the component members toward the common good, which common good is principally, though not exclusively, the material welfare of the members as a whole. As his ultimate end, however, man has his spiritual welfare. This government, this temporal power to rule and direct the human groups or societies or states, comes, therefore, from God for it is his will that such societies should exist. The answer of our Lord explicitly restates this fundamental norm of the divine natural law. "Give to Caesar what is Caesar's;" the state authorities have a right to the obedience and cooperation in all things that tend to the material welfare of the state, provided always the spiritual welfare of the members is not impeded by the rulers' demands.As a partly spiritual being man is destined to be a citizen of a spiritual eternal kingdom, and while on this earth he has the duty and the possibility of preparing himself for citizenship in that kingdom. And since this kingdom is of a higher and much more important nature, man's primary aim in life must be to reach that kingdom. He must, in other words, find out and fulfill his duties toward God; he must "give to God what is God's."This dual citizenship of man and the dual obligations that arise from it are the common knowledge of all from the natural law but are made more explicit still in divine revelation of which today's answer, given by Christ to the Pharisees, is a precise and perfect resume. We have duties to God and duties to our country and the fulfillment of the latter is part of the fulfillment of the former. We Christians have no doubts as to our obligations under these two headings. We fulfill our duties to God by being faithful, loyal, active members of the spiritual kingdom, the Church, which Christ established on earth in order to lead us to our eternal kingdom. We fulfill our duties to our country by loyally obeying the just laws of the State, by paying all lawful taxes, and by contributing our share, whenever called on, toward the common good.Both St. Peter (1 Pet. 2: 13-14) and St. Paul (Rom. 13: 1-7), stressed the obligation on the early Christians of being an example to all in their loyalty as citizens of the state. The same necessity obliges us too. We who know the divine, positive and natural law so much better than many others, must help to enlighten those others by our faithful observance of these laws. And our loyalty, too, will give the lie to those enemies of the faith who, in their ignorance and foolish opposition to things spiritual, are only too ready to think that loyalty to our Church and our God must of necessity make us disloyal to our country. History already has given the lie to such calumnies, for the loyal Christian has ever been the loyal citizen, but we must keep on writing such history in glaring lights of daily deeds, for there are, and there always will be, those enemies who cannot read history books. Excerpted from The Sunday Readings by Fr. Kevin O'Sullivan, O.F.M.

Commentary on the Readings for the Twentieth Sunday after Pentecost
"'Go thy way, thy son lives.' The man believed. . .As he was. . .going down, his servants met him and brought word saying that his son lived" (Gospel).

The weakened condition of the ruler's son reminds us of our own world. It is worn out by the fever of passion. It is unable to help itself until faith in God returns. A humble confession of sin is the secret of obtaining God's mercy (Introit) and pardon (Prayer).Be filled with the Spirit during the psalms and hymns of Mass; be subject to one another in public life (Epistle). Liturgy and Catholic Action are twins!When the official's faith was rewarded, he immediately spread the faith in his whole household, his relatives and employees. Gratitude should prompt you also to be lay apostles, ever ready to "speak religion" in and outside your house.Excerpted from My Sunday Missal, Confraternity of the Precious Blood
Find us on Social Media.