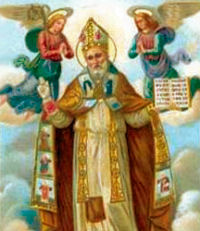 Historically today is the feast of St. Simon Stock, a hermit who became a member of the Carmelite order. He received a vision of the Blessed Mother promising salvation to all those who wore the brown scapular which she showed him — a vision that led to the widespread devotion to Mary over the next centuries of wearing this scapular in her honor. It is also the feast of St. Brendan called "the Navigator", "the Voyager", or "the Bold". He is one of the early Irish monastic saints and chiefly renowned for his legendary quest to the "Isle of the Blessed," also called Saint Brendan's Island. He was one of the Twelve Apostles of Ireland. 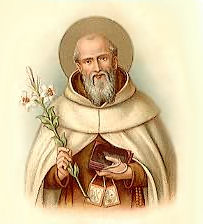 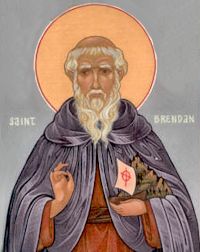 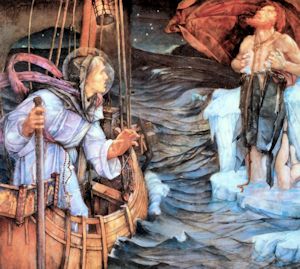 Finally the travelers reached an island where Brendan found an ancient monk sitting at the entrance to a cave. The ancient one told Brendan he had been a companion of St. Patrick and had been a hermit on the island for ninety years since Patrick's death. The hermit instructed Brendan to return once more to the Island of Sheep and once again to the Paradise of Birds, and after that he would be led to the Promised land of the Saints. There he and his companions would stay for forty days, and then be brought safely home to Ireland. After receiving the ancient monk's blessing, the companions sailed off and came to the Island of Sheep where they were once again attended to by the Steward. This time when they prepared to leave the Steward joined them in their boat. Next they met Jasconius who brought them on his back to the Paradise of Birds. After filling their water vessels, they companions set sail with the Steward as their guide, for, he said, without him they would never find the Promised Land of the Saints.On the fortieth day a great fog swallowed up their boat. The Steward told them that the fog always surrounded the land for which they had been searching these seven years. An hour later a brilliant light shone forth, and the boat touched shore. The monks disembarked and found a beautiful land filled with fruit-laden trees. They explored the land for forty days, never coming to the end of it. But on the fortieth day they discovered a wide river, which Brendan said they should not cross. A young man approached and greeted each of them by name. He explained that God had delayed them in finding the Promised Land of the Saints so that they might discover many things along the way. He instructed them to gather up fruit and supplies and to set sail for, he said, Brendan's last days were near. The Promised Land, he assured them, would be made known to Brendan's successors at a time when Christians were being persecuted, so that they might find a new home in peace. Brendan and his companions gathered up fruit and, taking their leave of the Steward, sailed out into the fog. They came again to the island of the ancient hermit, and stayed there with him for three days. Then they set sail once again and returned safely to Ireland. The monastery at Clonfert greeted him with great joy, and he recounted to them everything which they had encountered on their journey. Finally he told them of his approaching death, as foretold by the young man. After making everything ready, Brendan received the sacraments, and soon thereafter died among his companions in about the year 570.While the story of The Voyage of Brendan is filled with fanciful images, many modern scholars believe it has an historical foundation. Some claim that Brendan's voyage brought him to the shores of North America, making him and his companions the first Europeans to reach the continent—nearly a thousand years before Columbus. In 1977 a modern navigator built a replica of Brendan's boat and retraced his route across the Atlantic to Newfoundland, proving that such a journey was indeed possible.Whether or not Brendan's voyage is historically factual, the story speaks to us throughout the centuries. We, too, are on a journey. Our God has invited us to travel with our companions, and to invite others to journey with us along the way. We are cared for by the Steward and often make the journey through the years from Epiphany to Holy Thursday to Easter. We encounter many strange and wonderful things along the way. And, in the end, we, too, are promised that we will be brought safely home.—Excerpted from St. Brendan's Catholic Church and School
Patronage: boatmen, mariners, sailors, travellers, watermen, and whalesSymbols or Representation: priest celebrating Mass on board ship with fish gathering to listen, whale, member of a group of monks in a small boat. Things to Do:
Find us on Social Media.