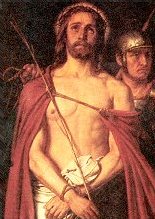 May your unfailing compassion, O Lord, cleanse and protect your Church, and since without you she cannot stand secure, may she be always governed by your grace. Through our Lord Jesus Christ, your Son, who lives and reigns with you in the unity of the Holy Spirit, one God, for ever and ever.

In the same year, Otto III appointed him chancellor for Italy and four years later also for Germany, a position which he held until Otto's death on 23 January 1002. Heribert was made an archbishop of Cologne on 998. Then, he also served Emperor St. Henry.Heribert built the monastery of Deutz, on the Rhine and performed miracles, including ending a drought. He is thus invoked for rains.He died in Cologne on March 16, 1021 and was buried at Deutz.He was already honored as a saint during his lifetime and was canonized by Pope St. Gregory VII about 1074.© Evangelizo.org Patron: RainThings to Do: 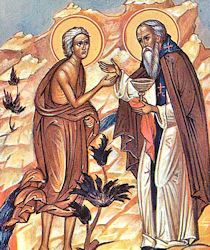 Abraham was a rich nobleman of Edessa. At his parents’ desire he married, but escaped to a cell near the city as soon as the feast was over. He walled up the cell-door, leaving only a small window through which he received his food. There for fifty years he sang God’s praises and implored mercy for himself and for all men. The wealth which fell to him on his parents’ death he gave to the poor.

As many sought him for advice and consolation, the Bishop of Edessa, in spite of his humility, ordained him priest. St. Abraham was sent, soon after his ordination, to an idolatrous city which had hitherto been deaf to every messenger. He was insulted, beaten, and three times banished, but he returned each time with fresh zeal. For three years he pleaded with God for those souls, and in the end prevailed. Every citizen came to him for Baptism.After providing for their spiritual needs he went back to his cell more than ever convinced of the power of prayer. His brother died, leaving an only daughter, Mary, to the Saint’s care. He placed her in a cell near his own, and devoted himself to training her in perfection. After twenty years of innocence she fell, and fled in despair to a distant city, where she drowned the voice of conscience in sin. The Saint and his friend St. Ephrem prayed earnestly for her during two years. Then he went disguised to seek the lost sheep, and had the joy of bringing her back to the desert a true penitent. She received the gift of miracles, and her countenance after death shone as the sun.St. Abraham died five years before her, about 360. All Edessa came for his last blessing and to secure his relics.Excerpted from Lives of the Saints, by Alban Butler, Benziger Bros. ed. [1894]Things to Do: