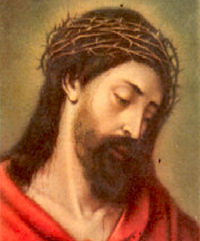 On the Cross, Christ is both priest and victim; he fulfills Isaiah's description of him as the suffering servant. And the whole of his teaching is to make us ready to live our sacramental life in his spirit of sacrifice. He impressed on us that we must match the outward sign of his sacraments in our lives. When we became other Christs in Baptism, we became other Christs in Baptisms, we became sharers in the priesthood of the Lord. We gained the ability and the responsibility of combining our inward obedience with every outward act of sacrifice that we make as priests and victims. In every Mass, then, we agree to offer our obedience to atone for, to correct the disobedience of sin. On his part, Christ agrees to renew his sacrifice of atonement and obedience, in which we join; and to nourish us on the victim, his flesh and blood, the covenant food. —St. Andrew Bible Missal

Historically today is the feast of St. Roderick of Cordoba, a priest and martyr who lived in Moorish Spain in the 9th century. He was beheaded in 857.

Confidence and Union with God in Temptation
Nothing is more efficacious against temptation than the remembrance of the Cross of Jesus. What did Christ come to do here below if not to "destroy the works of the devil"? And how has He destroyed them, how has He "cast out" the devil, as He Himself says, if not by His death upon the Cross?

Let us then lean by faith upon the cross of Christ Jesus, as our baptism gives us the right to do. The virtue of the cross is not exhausted. In baptism we were marked with the seal of the cross, we became members of Christ, enlightened by His light, and partakers of His life and of the salvation He brings to us. Hence, united to Him, whom shall we fear? Dominus illuminatio mea et salus mea; quern timebo? Let us say to ourselves: "He hath given His angels charge over thee to keep thee in all thy ways.""Because he hoped in Me (says the Lord) I will deliver him; I am with him in tribulation, I will deliver him, and I will glorify him. I will fill him with length of days, and I will show him My salvation." —Excerpted from Christ the Life of the Soul, Dom Marmion. 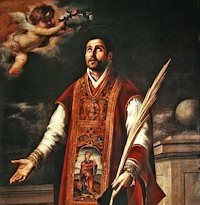 Jesus warned his disciples that they should expect no better treatment than Himself. They would be haled before governors and kings on His account, and brothers would even hand brothers over for execution.

That prophecy was literally fulfilled in the case of St. Roderick, a Spanish martyr who died at the hands of the Muslim Moors in A.D. 857. His was a bitter case of the reverse of Christian love. We owe the account to eyewitness St. Elogius, who later on died for the faith himself.It must be admitted that when the Mohammedans invaded Spain in A.D. 711, even they were sometimes shocked by the lack of religious principles among a large number of the Hispanic Christians. As the Moors swarmed in, the Catholics, far from presenting a strong front, became divided. Many, whether out of fear or lack of faith, voluntarily gave up their Christianity. Families thus split asunder and the members on either side railed at each other.St. Roderick was to prove a sad victim of this sort of betrayal. He was a good priest of Cabra who had two irresponsible brothers. One of them was a bad Christian who had all but abandoned his faith. The other had gone still further and joined Islam. One night the two started to fight each other unmercifully. Roderick tried to break them up, but instead of yielding, they turned on him and beat him senseless. Then the Muslim brother had the priest put on a litter and carried half-conscious through the streets. The Muslim accompanied the bier, proclaiming that Father Roderick, too, had apostatized, and that he wanted it known publicly before he died. Eventually the victim did recover and went off to a safe place.But Father Roderick had not yet seen the last of his renegade brother. The Muslim met the priest soon afterwards in the streets of Cordova. He had Roderick taken at once before the Mohammedan kadi (judge), where he accused him of the crime of having returned to Christianity after public profession of his Muslimism.Although Father Roderick protested that he had never denied his Christian faith, the kadi clapped him into the city's worst dungeon.In that fetid jail, the priest at least had the comfort of finding one Solomon, another Christian prisoner who had been accused of the same "unforgiveable" crime. Both of them were given a long term of imprisonment, in the hope that they would convert. But each man encouraged the other, and they remained firm in their Christian convictions. Even when separated, they would not change their belief.Eventually, the kadi ordered the Catholic priest and the layman beheaded. St. Eulogius saw their headless bodies lying on the riverside. He noticed that the guards were careful to throw into the stream any stones stained with the men's blood, for fear the faithful might pick them up as relics.The soldiers sought in vain to ward off veneration of SS. Roderick and Solomon. Spanish Christians would always honor them thereafter as martyrs. And they would also gradually learn from this heroism that the Faith is something really worth dying for.
—Father Robert F. McNamara, Excerpted from St. Kateri Tekakwitha ParishThings to Do: 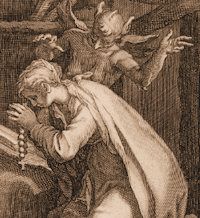 Antigonus, the father of this saint, was a nobleman of the first rank and quality in the court of Theodosius the Younger, nearly allied in blood to that emperor, and honoured by him with several great employments in the state. He was married to Euphrasia, a lady no less illustrious for her birth and virtue, by whom he had one only daughter and heiress, called also Euphrasia, the saint of whom we treat.