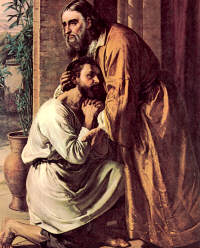 "Rejoice, Jerusalem! Be glad for her, you who love her; rejoice with her, you who mourned for her, and you will find contentment at her consoling breasts." This Sunday is known as Laetare Sunday and is a Sunday of joy. This is the halfway mark of Lent, and Easter is enticingly near.

This Sunday is called "Laetare Sunday" for the first word of the Introit or Entrance Antiphon laetare (rejoice). The celebrant has the option to wear rose colored vestments. This is also the Second Scrutiny in preparation for the baptism of adults at the Easter Vigil.Click here for commentary on the readings in the Extraordinary Form of the Roman Rite.

Fourth Sunday in Lent (Laetare Sunday)
Station at Holy Cross In Jerusalem (Santa Croce in Gerusalemme):
This church is one of the seven pilgrim churches in Rome. St. Helen, mother of the emperor Constantine, had a church built in Rome to house the relics of the Passion of Our Lord which she had obtained during her pilgrimage to the Holy Land. St. Helen discovered the true Cross of Our Savior with its title and the instruments of His death such as the nails and the crown of thorns. She had the top layer from Mount Calvary removed and placed in barges which carried this material to Rome. She then had the builders use this soil as the ground on which she had the basilica built for the sacred relics. The true Cross and other holy items have been kept in this basilica since its consecration in the fourth century and can be visited to this day. Because of the great relic enshrined there the basilica is called the Holy Cross and because it is built on the soil from Mount Calvary it is said to be in Jerusalem.

We all "wish" to be fed with joy, now and forever. The discipline of Lent may sadden our poor frail nature, so the Church analyzes the causes of true joy on this Rejoice or Laetare Sunday (Introit). The first source of genuine joy is a sincere Easter Confession; it emancipates us from the slavery of sin. We now enjoy the freedom of Christ's Gospel of love, because we have been freed from the bondage of that fear which prevailed in the days before Christ (Epistle).The second source of genuine joy is a fruitful Easter Communion, for which proper preparation and thanksgiving have been made. The soul's instinctive hunger is satisfied by the personal com-muning with God. In the picture, the Host and Chalice are seen descending upon men of all races (symbolized by the awaiting crowd). Humanity thus fed with Divinity, is joyously united in a real social and mystical union. Men will then work for one another in "a city which is compact together" (Communion Verse).Excerpted from My Sunday Missal, Confraternity of the Precious Blood