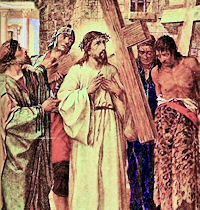 O God, by whom we are redeemed and receive adoption, look graciously upon your beloved sons and daughters, that those who believe in Christ may receive true freedom and an everlasting inheritance. Through our Lord Jesus Christ, your Son, who lives and reigns with you in the unity of the Holy Spirit, one God, for ever and ever.

And they brought to him a man who was deaf and had an impediment in his speech; and they besought him to lay his hand upon him. And taking him aside from the multitude privately, he put his fingers into his ears, and he spat and touched his tongue; and looking up to heaven, he sighed, and said to him, "Eph'phatha," that is, "Be opened." And his ears were opened, his tongue was released, and he spoke plainly (Mark 7:32-35).

The feast of St. Peter Claver, which is ordinarily celebrated today, is superseded by the Sunday liturgy.Click here for commentary on the readings in the Extraordinary Form of the Roman Rite.

Sunday Readings
The first reading is taken from the Book of the Prophet Isaiah 35:4-7 and contains the beautiful verse, "Then the eyes of the blind shall be opened, the ears of the deaf unsealed, then the lame shall leap like a deer and the tongues of the dumb sing for joy; for water gushes in the desert, streams in the wasteland, the scorched earth becomes a lake, the parched land springs of water.

The second reading is from the Letter of St. James 2:1-5. "It was those who are poor according to the world that God chose, to be rich in faith and to be the heirs to the kingdom which he promised to those who love him." The subject is that we should not grade people according to external appearance, for a person's quality is something that derives from his union with God—the more humble and understanding he is, the more honor he deserves. The Gospel is from St. Mark 7:31-37. During his discussion with the Samaritan woman at the well of Jacob, our Lord told her that "salvation was to come from the Jews" (Jn. 4 : 22). This was in accordance with God's plan when he took Abraham from his pagan family and surroundings, and elected him to be the father of a Chosen People from whom God's blessing would come for all nations (Gn. 12: 1-4). This was the historic beginning of "salvation" for men. It was, as yet, a vague generic promise but down through the following eighteen-century history of the Chosen People (Abraham's descendants) this blessing eventually became crystallized in the Messiah — the anointed and holy one of God. It was He who would introduce the messianic age of which the prophets so often had spoken, and it was in Him that all peoples, Jews and Gentiles, would find their true "blessing." It was right and fitting, therefore, that Christ should proclaim his kingdom and his Gospel among the Jews and in their promised land. Those who would accept him and his message would later spread the good news among the Gentile nations. This is what happened. His Apostles, including St. Paul, and the faithful disciples having done their best for their fellow-Jews, left Palestine and carried the great news of the incarnation — a blessing greater than any man could have imagined — to the pagan peoples of the then-known world. It was surely from the Jews that salvation came to us Gentiles.While Christ reserved his preaching to the Jews according to God's plan, he visited some of the Gentile lands bordering on Palestine — Tyre, Sidon, Phoenicia, the Decapolis — and worked some miracles there. However, he did not preach to them. This exception — going into pagan lands — was evidently important to St. Mark, for he goes into details in describing the faith of the people of the place who asked for a miracle, and their enthusiastic reaction to Christ's power when he did what they requested. Mark himself knew very well that Christ was fulfilling the divine plan when he restricted his preaching to the Jews, and that he had given a command to his Apostles to bring his Gospel to all nations (Mk. 16: 16). Possibly, however, some of his Gentile converts were questioning why Christ had not come to the Gentiles but spent all his public life in Palestine. In this short episode, Mark shows that Christ was interested indeed in Gentiles and showed his compassion for them by working miracles for them.We have much for which to thank God the Father, Christ and the good Jews who preached the Gospel to our ancestors. We should not think of questioning why Jesus spent his short public life trying to convert his fellow-Jews. God thought of us from all eternity — the incarnation was his way of giving a truly satisfying meaning to the life of man — the masterpiece and master of all his creation. It has given us a new status in life, a new purpose and an end worth every effort we can muster to gain. Life, with its trials and troubles and its brevity, has a meaning, a profound meaning, for Christians — it is a short period of preparation for the future which awaits us after death if we use it properly. Christ who carried out his Father's will even unto the death on the cross, deserves our unending gratitude. Eternity will not be long enough for us to thank and praise him. If ever we are tempted to be in any way anti-semitic let us first remember those of God's Chosen People who preserved the knowledge of God and trust in his promises until the time of their fulfillment had come. Secondly, we must never forget the Apostles and disciples of Christ who devoted and gave their lives in order to bring the Christian faith to us. The best way to show appreciation of a gift is to use it fully and gratefully. Let us make full use of the divine gift of salvation by living according to its teaching all the days of our lives. Excerpted from The Sunday Readings by Fr. Kevin O'Sullivan, O.F.M.Things to Do: Spend time meditating on today's readings; Take this Bible Study Course from St. Charles Borromeo Catholic Church.

Jesus reveals His Love by curing the victim of dropsy (pictured at the left). Love overcomes all human obstacles. The humble man does not, of course, expose his talents to the contempt of others. But he does recognize that every best gift is from above, loaned not for himself alone, but for his less favored neighbor as well.For this reason I bend my knees to the Father (Epistle), exclaims St. Paul, as he reflects on His glorious riches: how Divine love PURGES us by strength through His Spirit, ILLUMINATES us through our faith and then UNITES us in Christ's love. . .unto. . .the fullness of God. Humbly must we recognize the power that is at work in us.Excerpted from My Sunday Missal, Confraternity of the Precious Blood
Stay in Touch!