Memorial of the Immaculate Heart of Mary; Optional Memorial of St. Ephrem, deacon and doctor

Grant, Lord God, that we, your servants, may rejoice in unfailing health of mind and body, and, through the glorious intercession of Blessed Mary ever-Virgin, may we be set free from present sorrow and come to enjoy eternal happiness.
show

St. Ephrem, called "the Harp of the Holy Spirit," is the great classic Doctor of the Syrian church. As deacon at Edessa, he vigorously combated the heresies of his time, and to do so more effectively wrote poems and hymns about the mysteries of Christ, the Blessed Virgin and the saints. He had a great devotion to Our Lady. He was a commentator on Scripture and a preacher as well as a poet, and has left a considerable number of works, which were translated into other Eastern languages as well as into Greek and Latin. He died in 373. Benedict XV proclaimed him a Doctor of the Church in 1920.According to the 1962 Missal of St. John XXIII the Extraordinary Form of the Roman Rite, today is the feast of Sts. Primus and Felician as well as St. Columba. St. Ephrem's feast is celebrated on June 18.Primus and Felician are two Roman martyrs of the via Nomentana. Their relics, transferred in the seventh century within the city, are at present in the church of St. Stephen on the Coelian Hill.St. Columba, or Columkill, apostle of the Picts, was of illustrious Irish descent. He was brought up in the company of many saints at the school of St. Finian of Clonard. Being an ordained priest, and having founded many churches in Ireland, he went to Scotland with twelve companions, and there converted many of the northern Picts to the faith of Christ. He founded the monastery of Iona which became the nursery of saints and apostles. He also evangelized the northern English. He died on June 9, 597 at the foot of the altar at Iona while blessing his people, and was buried, like St. Brigid, beside St. Patrick at Downpatrick in Ulster. 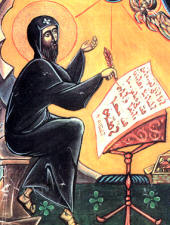 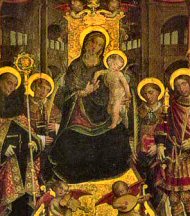 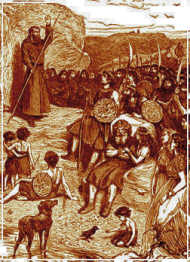 Thursday after Pentecost
Station at St. Lawrence in Panisperna (San Lorenzo in Panisperna):
Let us not forget that we celebrate today's mysteries "with St. Lawrence," the Roman deacon who walked so perfectly in the footprints of his predecessor in the diaconate, St. Philip. The unclean are cleaned, the sick are healed and joy reigns supreme. Pentecostal cleansing, pentecostal healing, pentecostal joy! Let us be modern Philips and Lawrences helping to alleviate bodily and spiritual misery of our brethren, thus paving the way for the "Spirit of the Lord who fillet the whole world." (Msgr. Martin Hellriegel)
The church stands on the site of St. Lawrence's martyrdom. The appellation refers to the name of the street, which in turn most likely refers to the tradition of the Poor Clares in the adjacent convent of distributing bread and ham (pane e perna) on August 10th, the feast day of St. Lawrence. This is done in remembrance of St. Lawrence distributing funds from the church to the poor.