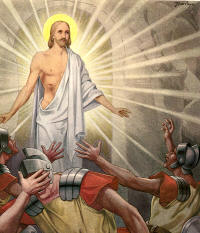 O God, who have united the many nations in confessing your name, grant that those reborn in the font of Baptism may be one in the faith of their hearts and the homage of their deeds. Through our Lord Jesus Christ, your Son, who lives and reigns with you in the unity of the Holy Spirit, God, for ever and ever.

"Jesus himself stood among them and said to them, 'Peace be with you!'" The Gospel tells of an appearance of Jesus in the Cenacle on the very day of His resurrection. The newly baptized (neophytes) and all Christians with them, must live like the risen Christ, none but a heavenly life and by their manner of living proclaim their faith in Christ.

"This is the day the Lord has made, Alleluia!
Let us rejoice and be glad, Alleluia!"Stational Church


Meditation
Shallow minds are easily scandalized at the thought that, despite Christ Jesus' divine mission and His heroic earnestness in fulfilling it, despite the limitless possibilities of the Sacrifice of Calvary glorified in the power of the Resurrection, even now so many human souls are still sick and diseased, even dead in sin and seemingly lost in impenitence.

But think for a moment of some definite astounding force in nature, as for instance lightning, or even better, of so simple a force as the stroke of a hammer or the approach of a lighted match; notice the vast difference in the effects produced on a block of granite, on a cake of ice, and on a keg of powder. Even so, the definite effect of the same graces upon different individual souls depends on the receptivity of each. Yet never doubt, the doors of the treasury of the merits and fruits of Calvary are wide open; the fountains of the Savior are pouring out heavenly waters to purify and cure and refresh souls; the invitation goes out to all:

"Come, eat My bread, and drink the wine which I have mingled for you. All you that thirst come to the waters, and you that have no money, make haste, buy, and eat: come ye, buy wine and milk without money! Come! to experience the virtue of the waters, and of the food, and of the medicine, and of the fire. Come and drink lest you die of thirst! Come and eat lest your soul hunger and starve! Come, approach the fire of My charity, to be stirred out of your spiritual coldness and numbness!"

Thursday in the Octave of Easter
Station with Ss. XII Apostoli al Foro Traiano (Twelve Holy Apostles at Trajan's Forum):
At Rome, the Station is in the Basilica of the Twelve Apostles, better known in Rome as better known as Santi Apostoli. The newly baptized were brought, today, into the church dedicated to the witnesses of the Resurrection, where repose the bodies of two out of the twelve: St. Philip and St. James the Less. An ancient inscription shows that this church was formerly dedicated to Philip and James. See Walks in Rome page for some highlights of this basilica.