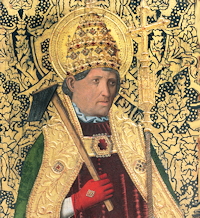 St. Fabian, a Roman, was as energetic as he was admired and respected. He was able to accomplish a great deal during his long pontificate. Escaping the persecution of Emperor Maximus Thrax, who had been assassinated, Fabian enjoyed peace in the Church under the reigns of succeeding emperors.

One of St. Fabian's first acts was to reorganize the clergy of Rome to better serve the increasing flock. He is also credited with beautifying and enlarging the cemeteries. He ordered paintings to adorn the vaults, and he erected a church above the cemetery of Calixtus.

The Church flourished under St. Fabian as a succession of emperors left the Christians to themselves. This peaceful time came to an abrupt end with the ascension of Emperor Decius. He was a cruel enemy and he decreed that all Christians were to deny Christ by openly worshipping pagan idols. The Church was to lose many followers, but more stood firm to suffer torture and even death. Certainly, one of the first was Pope Fabian. Arrested, he was thrown in prison and died at the hands of his brutal captors. He is buried in the cemetery of Calixtus.

The name of Sebastian is enveloped in a wreath of legends. The oldest historical account of the saint is found in a commentary on the psalms by St. Ambrose; the passage reads: "Allow me to propose to you the example of the holy martyr Sebastian. By birth, he was a Milanese. Perhaps the persecutor of Christians had left Milan, or had not yet arrived, or had become momentarily more tolerant. Sebastian believed that here there was no opportunity for combat, or that it had already passed. So he went to Rome, the scene of bitter opposition arising from the Christians' zeal for the faith. There he suffered, there he gained the crown." 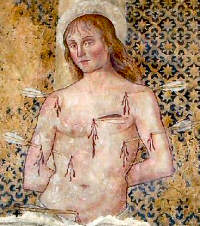 St. Sebastian was widely venerated during the Middle Ages, particularly as a protector against the plague. Paul the Deacon relates that in 670 a great pestilence at Rome ceased when an altar was dedicated in his honor. The Breviary account of the saint is highly legendary; in part, it reads: "Diocletian tried by every means to turn Sebastian from the faith of Christ. After all, efforts had proven fruitless, he ordered him tied to a post and pierced with arrows. When everyone thought him dead, a devout woman named Irene arranged for his burial during the night; finding him still alive, she cared for him in her own house. After his recovery, he appeared again before Diocletian and boldly rebuked him for his wickedness. Enraged by the saint's sharp words, the emperor ordered him scourged until he expired. His body was thrown into a sewer."

Symbols and Representation: Arrows of martyrdom; naked youth tied to a tree and shot with arrows; arrows; crown.

Henrik was born Henry, an Englishman, sometime in the early 12th century. It is unknown where he began his ecclesiastical career, but in 1152 he appears as a companion of papal legate and fellow Englishman Nicholas Breakspear (later Pope Adrian IV), who spent two years in Scandinavia trying to organize the Church in that region. Henrik appears to have remained behind, where he was later appointed Bishop of Uppsala, primatial See of Sweden, in 1156. This was around one year after Eric IX Jedvardsson, also known as King Eric the Saint, took the throne of Sweden. Henrik, who had a heart for missionary work, found a friend and supporter in the zealous King Eric, who was anxious to spread the Faith into neighboring Finland as a means of not only winning souls, but stabilizing his own borders.

Allegedly, Eric organized a sort of crusade to bring Finland under Swedish rule and spread the Faith, although there is no contemporary evidence of such a military adventure. What is certain is that, at the behest of King Eric, the Bishop of Uppsala was persuaded to go to Finland to spread the Faith in that region. He was not in Finland long when he was murdered by a pagan Finn, to whom tradition assigns the name Lalli. According to some accounts, his martyrdom occurred as a result of Henrik attempting to enforce a canonical penalty on a murderer; in the more popular tale, Henrik stops to purchase some food from a local woman before crossing a frozen lake by slegde. When the woman's husband Lalli returns home, she tells him only that Henrik came and took the food but neglects to mention that he also paid for it. In anger, Lalli follows Henrik out upon the ice of the lake where he murders him and takes his mitre home in gloating triumph. According to tradition, Henrik was martyred on January 20th, 1156.

Finnish cultural tradition has taken a macabre interest in speculating about the fate of Lalli, the murderer. All traditions agree that Lalli died soon after Henrik, unrepentant and tormented. The favorite story of Lalli tells how he came home from the murder wearing the bishop's mitre. When he went to remove it from his head, his scalp came off with it; thus St. Henrik is often depicted in medieval iconography standing on top of Lalli, who is always depicted as bald. Other stories tell of Lalli being pursued relentlessly by a band of mice who constantly tried to eat him alive. There are tales of Lalli climbing a tree or moving from house to house to escape the gnawing mice; finally he seeks refuge at sea, but the mice some how find him and he and the mice end up drowning together. The gnawing mice which relentlessly seek to devour Lalli are an apt symbol of the gnawing of conscience.

Henrik soon became the national saint of Finland, although he was largely ignored outside of Scandinavia. In Scandinavian countries, his feast day (January 20th) is the occasion of a tremendous festival called Heikinpäivä. The Heikinpäivä festival, though originally a Finnish solemnity, is actually more important in other areas of the world that were settled by Finns than in Finland itself, which has lost touch with much of its Catholic past. The region of the world that is best known for its festive celebration of Heikinpäivä is Michigan's Upper Peninsula, which was settled by Finns in the 19th century. The Michigan celebrations are largely civic and cultural in nature, having lost a lot of the relevance to the martyr-saint, but it is still a real treat to visit the north during the time of the this festival.