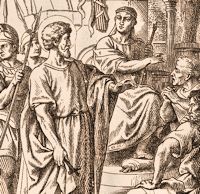 O God, who willed that through the paschal mysteries the gates of mercy should stand open for your faithful, look upon us and have mercy, that as we follow, by your gift, the way you desire for us, so may we never stray from the paths of life Through our Lord Jesus Christ, your Son , who lives and reigns with you in the unity of the Holy Spirit, God, for ever and ever.