Feast of the Dedication of St. John Lateran Basilica 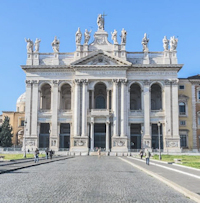 O God, who from living and chosen stones prepare an eternal dwelling for your majesty, increase in your Church the spirit of grace you have bestowed, so that by new growth your faithful people may build up the heavenly Jerusalem. Through our Lord Jesus Christ, your Son, who lives and reigns with you in the unity of the Holy Spirit, God, for ever and ever.

Today the Church celebrates the feast of the Dedication of the Lateran Basilica in Rome, the oldest and highest ranking of the four major basilicas in Rome. The Basilica of St. John Lateran is the cathedral of the diocese of Rome, the official ecclesiastical seat of the Holy Father, the Bishop of Rome, not St. Peter's Basilica as so many mistakenly believe. The Basilica is also called the Church of Holy Savior or the Church of St. John Baptist. In ancient Rome this was the church where everyone was baptized. It the oldest church in the West, built in the time of Constantine and was consecrated by Pope Sylvester in 324. This feast became a universal celebration in honor of the archbasilica, the ecclesiastical mother church, called "the mother and mistress of all churches of Rome and the world" (omnium urbis et orbis ecclesiarum mater et caput), as a sign of love for and union with the See of Peter.

According to the 1962 Missal of St. John XXIII the Extraordinary Form of the Roman Rite, today is the commemoration of St. Theodore, a Christian soldier and martyr of Asia Minor.

The Temple of Stones is a Symbol of the Living Church 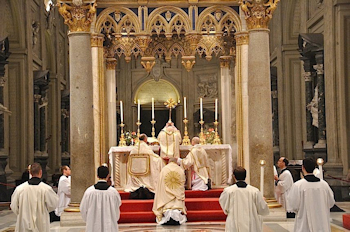 Today the liturgy celebrates the dedication of the Lateran Basilica, called “mother and head of all the churches of the city and the world.” In fact, this basilica was the first to be built after Emperor Constantine’s edict, in 313, granted Christians freedom to practice their religion.

The emperor himself gave Pope Miltiades the ancient palace of the Laterani family, and the basilica, the baptistery, and the patriarchate, that is, the Bishop of Rome’s residence — where the Popes lived until the Avignon period — were all built there. The basilica’s dedication was celebrated by Pope Sylvester around 324 and was named Most Holy Savior; only after the 6th century were the names of St. John the Baptist and St. John the Evangelist added, and now is typically denominated by these latter.Initially the observance of this feast was confined to the city of Rome; then, beginning in 1565, it was extended to all the Churches of the Roman rite. The honoring of this sacred edifice was a way of expressing love and veneration for the Roman Church, which, as St. Ignatius of Antioch says, “presides in charity” over the whole Catholic communion (Letter to the Romans, 1:1).On this solemnity the Word of God recalls an essential truth: the temple of stones is a symbol of the living Church, the Christian community, which in their letters the Apostles Peter and Paul already understood as a “spiritual edifice,” built by God with “living stones,” namely, Christians themselves, upon the one foundation of Jesus Christ, who is called the “cornerstone” (cf. 1 Corinthians 3:9-11, 16-17; 1 Peter 2:4-8; Ephesians 2:20-22). “Brothers, you are God’s building,” St. Paul wrote, and added: “holy is God’s temple, which you are” (1 Corinthians 3:9c, 17).The beauty and harmony of the churches, destined to give praise to God, also draws us human beings, limited and sinful, to convert to form a “cosmos,” a well-ordered structure, in intimate communion with Jesus, who is the true Saint of saints. This happens in a culminating way in the Eucharistic liturgy, in which the “ecclesia,” that is, the community of the baptized, come together in a unified way to listen to the Word of God and nourish themselves with the Body and Blood of Christ. From these two tables the Church of living stones is built up in truth and charity and is internally formed by the Holy Spirit transforming herself into what she receives, conforming herself more and more to the Lord Jesus Christ. She herself, if she lives in sincere and fraternal unity, in this way becomes the spiritual sacrifice pleasing to God.Dear friends, today’s feast celebrates a mystery that is always relevant: God’s desire to build a spiritual temple in the world, a community that worships him in spirit and truth (cf. John 4:23-24). But this observance also reminds us of the importance of the material buildings in which the community gathers to celebrate the praises of God. Every community therefore has the duty to take special care of its own sacred buildings, which are a precious religious and historical patrimony. For this we call upon the intercession of Mary Most Holy, that she help us to become, like her, the “house of God,” living temple of his love. —Benedict XVI, Angelus Address, November 9, 2008Things to Do: