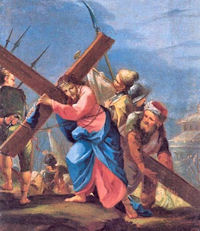 Then Jesus said to his disciples, "Whoever wishes to come after me must deny himself, take up his cross, and follow me. For whoever wishes to save his life will lose it, but whoever loses his life for my sake will find it. What profit would there be for one to gain the whole world and forfeit his life? Or what can one give in exchange for his life? For the Son of Man will come with his angels in his Father's glory, and then he will repay everyone according to his conduct. Amen, I say to you, there are some standing here who will not taste death until they see the Son of Man coming in his kingdom" (Matt. 16:24-28).

Commentary on the Readings for the Twelfth Sunday after Pentecost
"A Samaritan (seeing the robbers' victim) was moved with compassion, bound up his wounds, pouring on oil and wine, and took care of him. And Jesus said, 'Go and do thou also in like manner'" (Gospel).

St. Bede suggests that this victim is Adam and the human race robbed by Satan (pictured at left). Jesus, our Divine Rescuer (pictured at right), comes to pour "wine and oil" into our "wounds": the "life"-giving Wine of His Precious Blood (PostCommunion), the "cheerful...oil" of all His Sacraments (Communion Verse).Otherwise, having left the "Jerusalem" of Divine Life, how could we "run without stumbling" (Prayer) lifeless into the Dead Sea next to "Jericho"? "We are not sufficient of ourselves..our sufficiency is from God." Without Jesus the Ten Commandments would be dead "letters upon stones" (Epistle)What Christ does for us, we "in like manner" are to do unto others, friend and foe. "Samaritan-charity" is Christ's own teaching.Excerpted from My Sunday Missal, Confraternity of the Precious Blood
Find us on Social Media.