Optional Memorial of the Dedication of St. Mary Major

Pardon the faults of your servants, we pray, O Lord, that we, who cannot please you by our own deeds, may be saved through the intercession of the Mother of your Son and our Lord. Who lives and reigns with you in the unity of the Holy Spirit, one God, for ever and ever.

We celebrate today the dedication of one of the four most illustrious churches of Rome. While each diocese and parish keeps its own dedication anniversary, the Church universal commemorates the consecration of the four great Roman basilicas, the mother churches, we may call them, of Christendom, viz., St. John Lateran, St. Peter, St. Paul Outside the Walls, and St. Mary Major. By means of these feasts the Church seeks to link all Christians with the Holy See.

This feast commemorates the miracle of the snowfall that occurred during the night of August 4-5 in the year 358 on the site where the basilica now stands. According to tradition, the Virgin Mary appeared in a dream to two faithful Roman Christians, the patrician John and his wife, as well as to Pope Liberius (352-366), asking that a church be built in her honor on the site where snow would fall on the night of August 4-5. Pope Liberius traced the outlines of the church in the snow and the first basilica was built on that site. It was completed about a century later by Pope Sixtus III (432-440), after the Council of Ephesus in 431 during which Mary was declared to be the Mother of God. In Rome the Basilica of St. Mary Major will hold its traditional triduum from August 1 to 3 and two days of celebration on August 4 and 5. During the pontifical Mass and the second vespers, the traditional shower of flower petals will descend from the ceiling of the basilica to commemorate the August snowfall in 358.St. Oswald, king, is mentioned in the Roman Martyrology. St. Bede the Venerable commemorates his deeds. He was sometimes portrayed as a martyr, since he died in battle against the pagan Welsh invaders.Historically it is also the feast of St. Emygdius who lived in the 3rd and 4th century and was a Christian bishop in Ascoli Piceno in Italy. He converted many people to Christianity with his displays of miracles.

(a) It stands as a venerable monument to the Council of Ephesus (431), at which the dogma of Mary's divine Motherhood was solemnly defined; the definition of the Council occasioned a most notable increase in the veneration paid to Mary.

(b) The basilica is Rome's "church of the crib," a kind of Bethlehem within the Eternal City; it also is a celebrated station church, serving, for instance, as the center for Rome's liturgy for the first Mass on Christmas. In some measure every picture of Mary with the divine Child is traceable to this church.

(c) St. Mary Major is Christendom's first Marian shrine for pilgrims. It set the precedent for the countless shrines where pilgrims gather to honor our Blessed Mother throughout the world. Here was introduced an authentic expression of popular piety that has been the source of untold blessings and graces for Christianity in the past as in the present.

The beginnings of St. Mary Major date to the Constantinian period. Originally it was called the Sicinini Basilica; it was the palace of a patrician family by that name before its transformation into a church by Pope Liberius. The story of its origin is legendary, dating from the Middle Ages. The Breviary gives this version: "Liberius was on the chair of Peter (352-366) when the Roman patrician John and his wife, who was of like nobility, vowed to bequeath their estate to the most holy Virgin and Mother of God, for they had no children to whom their property could go. The couple gave themselves to assiduous prayer, beseeching Mary to make known to them in some way what pious work they should subsidize in her honor.

"Mary answered their petition and confirmed her reply by means of the following miracle. On the fifth of August — a time when it is unbearably hot in the city of Rome — a portion of the Esquiline would be covered with snow during the night. During that same night the Mother of God directed John and his wife in separate dreams to build a church to be dedicated to the Virgin Mary on the site where they would see snow lying. For it was in this manner that she wanted her inheritance to be used."John immediately reported the whole matter to Pope Liberius, and he declared that a similar dream had come to him. Accompanied by clergy and people, Liberius proceeded on the following morning in solemn procession to the snow-covered hill and there marked off the area on which the church in Mary's honor was to be constructed." Under Pope Sixtus III (432-440) the basilica was rebuilt, and upon the occasion of the definition of Mary's divine Motherhood by the Council of Ephesus, consecrated to her honor (432). He decorated the apse and walls with mosaics from the lives of Christ and His blessed Mother, which even to this day beautify the church and belong to the oldest we possess. As early as the end of the fourth century a replica of the Bethlehem nativity grotto had been added; on this account the edifice became known as "St. Mary of the Crib." To the Christian at Rome this church is Bethlehem. Other names for the basilica are: Liberian Basilica, because it dates to the time of Pope Liberius; St. Mary Major (being the largest church in Mary's honor in Rome); Our Lady of the Snow, because of the miracle that supposedly occasioned its erection. We could point out how the divine Motherhood mystery dominates all Marian liturgy; for the Theotokos doctrine has kept Mariology Christo-centric in the Church's worship. Although recent popular devotion to Mary has become to a certain extent soft and sentimental and has, one may say, erected its own sanctuary around Mary as the center, devotion to our Blessed Mother in the liturgy has always remained oriented to Christ. In the liturgy the divine Motherhood has always been the bridge from Mary to Jesus. One need only examine Matins in honor of Mary or the Masses from her Common to be reassured. Everywhere Christ takes the central position, and Mary is the Christbearer. Excerpted from The Church's Year of Grace, Pius Parsch.Things to Do: 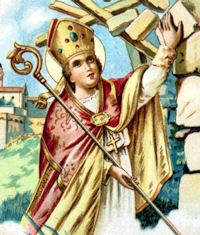 Emygdius was born in Treves [Germany] of a noble Frank family. In his twenty-third year he embraced the faith of Christ in spite of opposition of his parents who were idolaters, and this faith he steadfastly professed. He lived with three disciples, Euplus, Germanus and Valentinus. He scorned human pleasures, and thus he applied himself the more entirely to divine things. Fired with a burning love of the neighbor, he journeyed to Rome in order to bring about the salvation to many souls, and he was there received as a guest, in the Island of the Tiber, where he cured, by baptism, the daughter of his host, who had been ill for five years of an incurable disease. A little later he opened the eyes of a blind man, in the presence of the people by the sign of the Cross. Thereupon the crowd, thinking that he was the son of Apollo, carried him off by force to the Temple of Aesculapius. he there declared himself the servant of Christ, and by calling upon Christ's name he restored to health a great number of sick persons, who were vainly beseeching the help of the idol. Emygdius tore down the altars, and having broken in pieces the statue of Aesculapius, he cast it into the Tiber. These acts, and the conversion of thirteen hundred of the heathen, which followed, together with that of the priests of Aesculapius, enraged Posthumius Titanus, the Prefect of City. Emygdius, by the counsel of an angel, escaped from his threats, and betook himself to the Pontiff, Saint Marcellus, by whom he was consecrated Bishop, and sent to Ascoli.

On his way thither Emygdius converted a multitude of persons to Christ by the many miracles which he wrought. The demons, whose wailing issued from the idols and filled the temples upon his arrival at Ascoli, declared a traveler to be the cause of their distress. The people were aroused, and sought to slay him, whereupon Polymius, the Governor, who was brought out by the tumult, called Emygdius to him, and in a long fruitless discourse he urged him to worship Jupiter and the goddess Angaria, the patroness of Ascoli. He even promised him as a reward the hand of his daughter Polisia, whom Emygdius converted to Christ and baptized on the spot. Her baptism was followed by that of sixteen hundred men, the Saint having drawn, by a miracle, an abundance of water from the rock. Thrown into fury by these events, Polymius cut off the head of the holy Bishop, whereupon the body, wonderful to relate, stood erect, and bearing in its hands the head which had been cast upon the ground, carried it to the Oratory, a distance of three hundred feet. it was removed thence to the principal church, where it is honored by the people of Ascoli, as well as by a multitude of people from other parts of [Italy]. The blessed death of Emygdius took place during the persecution of Diocletian.Excerpted from Saints of Carmel - Proper Offices of the Saints Granted to the Barefoot Carmelites' 1896 edition, Carmelite Spirituality BlogPatron: Against earthquakes.Things to Do: 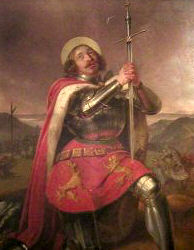 Forced to flee from Northumbria to Scotland when his father, Aethelfrith, was defeated and killed by Raedwald in 617, Oswald was converted to Christianity at Iona while he was in Scotland. When his uncle, King St. Edwin of Northumbria, was killed in battle against pagan King Penda of Mercia and Welsh King Cadwallon in 633, Oswald assembled an army and in 634 defeated a superior force under Cadwallon, who was killed in a battle near Hexham, and Oswald became King of Northumbria. He attributed his victory to a vision he had had of St. Columba promising him victory and to a huge cross he had erected the night before the battle. He brought St. Aidan to his kingdom to preach Christianity, gave him the island of Lindisfarne for his see, and acted as his interpreter. He built churches and monasteries, brought in monks from Scotland to bring his people back to Christianity, and was known for his personal piety and charity. He married Cyneburga, daughter of Cynegils, first Christian king of Wessex, and died a few years later, on August 5, while fighting against the superior forces of Penda at Maserfield. He was only thirty-seven at his death.