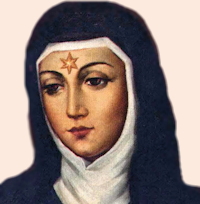 According to the 1962 Missal of Bl. John XXIII the Extraordinary Form of the Roman Rite, today is the feast of St. Hyacinth, a canon of Breslau, who joined the Dominican Order in Rome during the lifetime of the founder, in about the year 1217. He returned to Cracow with the first band of Dominican missionaries. The newcomers spread over all the northern countries into Russia, the Balkans, Prussia and Lithuania. St. Hyacinth preached the crusade against the Prussians. He died on the feast of the Assumption, 1257.

St. Beatrice of Silva
St. Beatrice was born in Campo Mayor, Portugal, around 1424. She was the daughter of Rodrigo Gómez de Silva and Isabella de Meneses, who had eleven children in all. Both were descendants of noble families, related to the royal houses of Spain and Portugal. One of their children, the fifth in the order of birth, was Blessed Amedeo de Silva, founder of the Amadeites, a reformed branch that later rejoined the Order of Friars Minor.Beatrice spent her childhood and adolescence in Campo Mayor, where her father had moved from Ceuta before her birth. Her mother, very fond of the Friars Minor, wanted some of them to take care of the education of her children. At the same time, they taught the boys a special devotion to the Immaculate Conception of the Virgin Mary. The Franciscan Order, in fact, defended that particularity of the Madonna, in contrast with those who, instead, claimed that she had not been preserved from original sin (the so-called macolatists).A legend tells that Beatrice's father had commissioned an Italian painter to paint the Madonna with the Child Jesus in her arms, flanked by Saint Francis of Assisi and Saint Anthony of Padua. The painter, who arrived at the nobleman's residence, asked him to use Beatrice herself as a model. The young woman accepted her, but during the time she posed she never opened her eyes, due to her modesty that she felt because her features would be reproduced as the basis for those of the Virgin. That painting is still known today as "The Virgin with closed eyes". 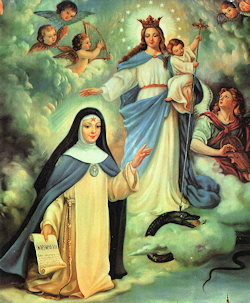 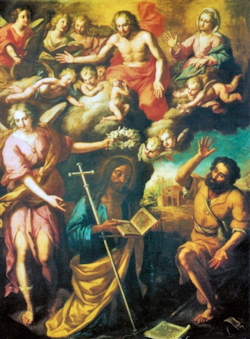 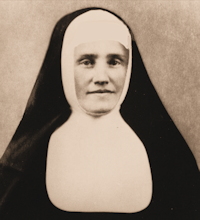 She therefore turned to Saint Anne and promised to teach for free if Saint Anne heals her. As she fulfilled this promise, Father Langevin, who was named Bishop of Rimouski, asked her to direct the small community of teachers that was being formed in his diocese. She hesitated because of her poor health, but ended up accepting because she believed it is God’s will for her to enter religious life. With other young women she formed the first group of the Soeurs des Petites Ecoles, dedicated to the education of the poor children of the surrounding countryside. On September 12, 1879, Elisabeth and twelve other sisters took their vows. Marie-Elisabeth was made superior and committed herself to establish the community of sisters and regularized its status (civil charter, constitutions, rule). She founded the community’s first mission on January 2, 1880 and two others the following September, in outlying and poor parts of the Diocese of Rimouski. Then she opened a private school in Rimouski, where the novices had their first teaching experience.Charity was the unifying principle in Elisabeth’s life. She offered love to everyone, especially to her sisters, by being very attentive with them and always filled with goodness. Despite her poor health, she showed extraordinary strength: she worked day and night and overcame difficulties with patience and joy. She died on August 17, 1881, only 41 years old. She was beatified on April 26, 2015.—Excerpted from CRCThings to Do:
Find us on Social Media.