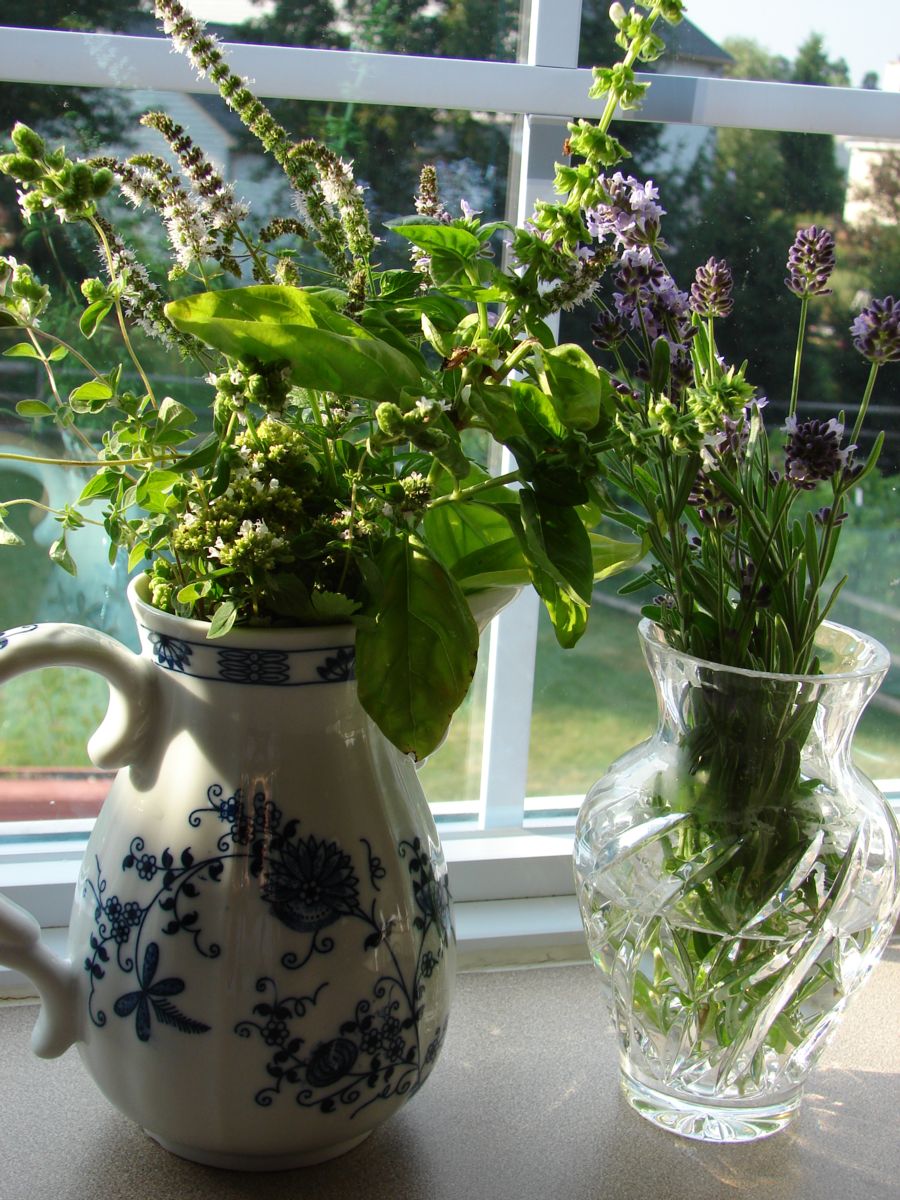 From the archives, originally written in August 2014.

Please Note for 2016: August 15 is not a holyday obligation in the United States. The diocese of the United States celebrate only six Holydays of Obligation during the Liturgical Year. In most provinces the Solemnity of the Ascension is moved to the following Sunday. The USCCB have also added the exception:

The month of August has only one solemnity, and it is also a Holy day of Obligation (unless it falls on Saturday or Monday in the United Sates): August 15, the Solemnity of the Assumption of the Blessed Virgin Mary, body and soul into heaven. This feast has the juxtaposition of being one of the oldest feasts of Mary dating back to the sixth century but also has the most recent declaration of the dogma of Mary’s assumption in 1950.

The feast of the Assumption is closely connected to the other Marian dogma of the Immaculate Conception. Mary was conceived without Original Sin, which we celebrate on December 8. She remained stainless from sin, and so the Assumption is the reward of being sinless. Her body was too pure to remain on earth to decompose, so it was taken up by God to be united with her soul.

The main legend which led to the tradition of the Assumption is that the Blessed Mother died in the presence of most of the Apostles (St. Thomas was missing) and her body was laid in a tomb. Later the apostles brought St. Thomas to see the tomb. It was then they discovered that Mary’s body was gone and the tomb was filled with beautiful and fragrant flowers.

Traditional Blessing of the Sea

There are two traditional blessings on this feast. One is based from the region of Chioggio-Venice, Italy, called the Wedding and Blessing of the Sea. On the feast of the Assumption Italian cities like Venice and along the New York and New Jersey shoreline have this blessing. I was able to attend one year in Ocean City, New Jersey. The pastor was rowed out a little way from the shore, prayed the blessing of the sea, and sprinkled the water and threw a flower-decorated lifesaver into the ocean. For this city the ceremony was simple. In other cities along the coast it can be more elaborate.

The blessing is threefold: recognizing the awesome power of God as seen through the ocean, so that we may grow closer in contemplation of our Heavenly Father; asking for safety when on the water, such as when boating; and asking for blessing upon those who rely on the ocean for their livelihood, such as fisherman. I have not been able to find the connection on why it would fall on Our Lady’s feast day, though.

Blessing of Herbs, Fruits and Flowers

Of more universal appeal is the tradition of Blessing of Herbs and Flowers which dates back to the ninth century. According to Father Francis X. Weiser:

[T]his particular blessing was likely based on a popular tradition that after Mary’s assumption into heaven flowers were found in her tomb where her body had been. The blessing, which took place during the late bloom of the growing season, asked God to provide for the “welfare of the body” and for protection against diabolical forces. The thrust of the blessing was health and healing for human and non human alike.

There is also in some regions an inclusion of fruits and grains or “firstfruits” in presenting to be blessed on this day. (The second reading from 1 Corinthians 15:20-27 is a reminder of these “firstfruits”.) In rural communities a more extended Harvest Prayers and Blessings can be used. The Assumption is another “harvest” feast; Mother Church unites our seasons (at least in the Northern Hemisphere) with our feasts, recognizing both our human and spiritual needs. 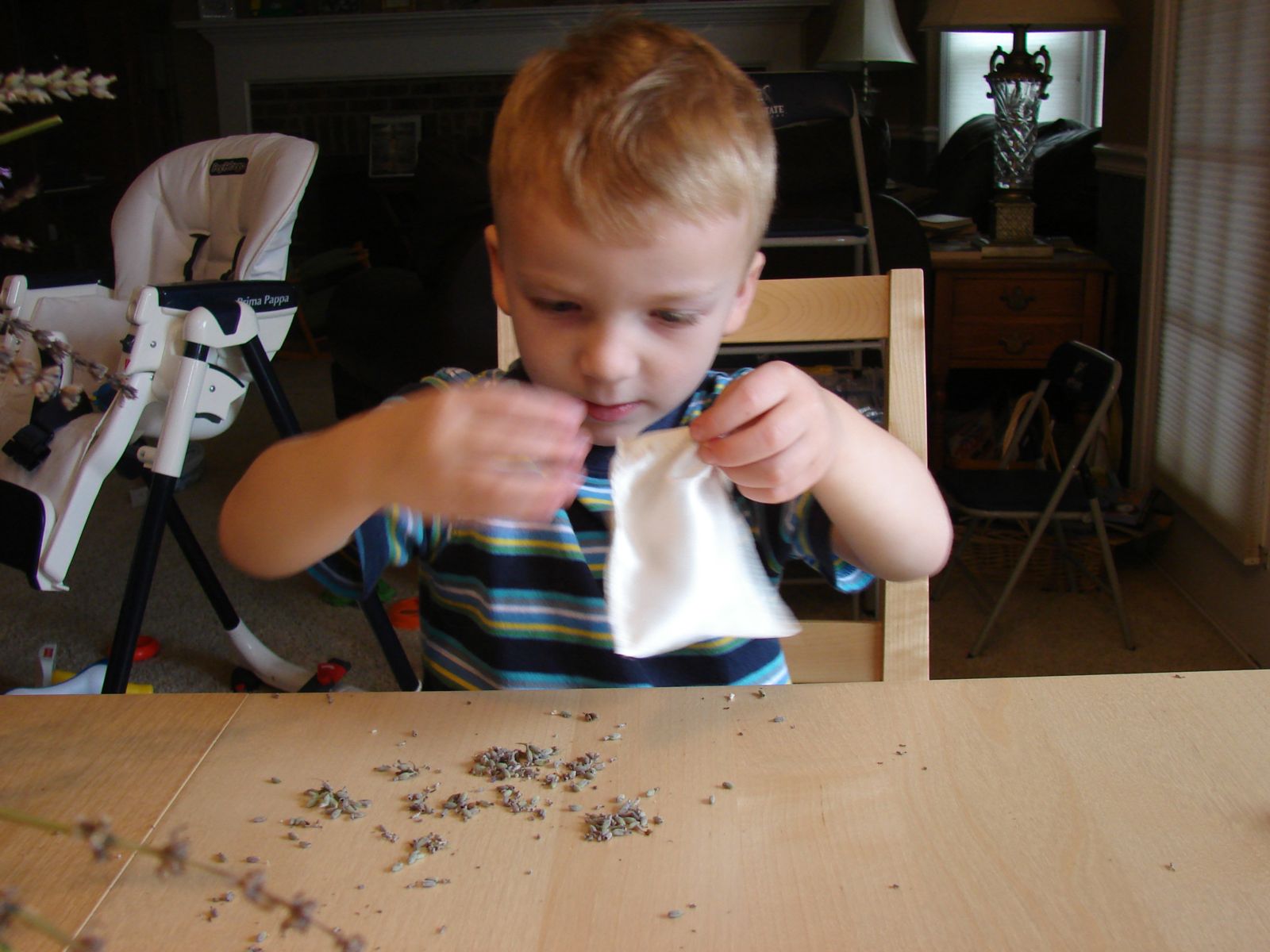 Florence Berger’s writings, particularly her Cooking for Christ always inspire me, especially for Marian Feasts. I always enjoy reading her description of their gathering herbs for the Assumption. This is one of my favorite sections of her book, mostly because it aptly describes how feast day celebrations are often done in my home. There is a mad dash: “Feast day, TOMORROW? (sometimes, TODAY)??? I haven’t done a thing!” I also think her recipe for Moravian Spice Cookies on the Immaculate Conception is a perfect tie-in for the Assumption. She cites the passage in the Book of Sirach (formerly Ecclesiasticus), 24:20-21 that describes Mary:

I gave a sweet smell like cinnamon and aromatical balm; I yielded a sweet odor like the best myrrh; and I perfumed my dwelling as store, and galbanum, and onyx, and aloes, and as the frankincense not cut, and my odor is as the purest balm.

The Immaculate Conception recipe features spices, and the Assumption feast features fragrant herbs. Herbs in the looser definition do include flowers, and in the modern connotation also include spices. But whether spices, flowers, or herbs, there is beauty and fragrance symbolizing the purity and sinlessness of the Blessed Virgin Mary.

Incorporating the Herbs and Firstfruits

For several years we have gathered our herbs and fruits and flowers for this feast. Just having the beautiful bouquet on the table is a fragrant reminder of Our Lady. 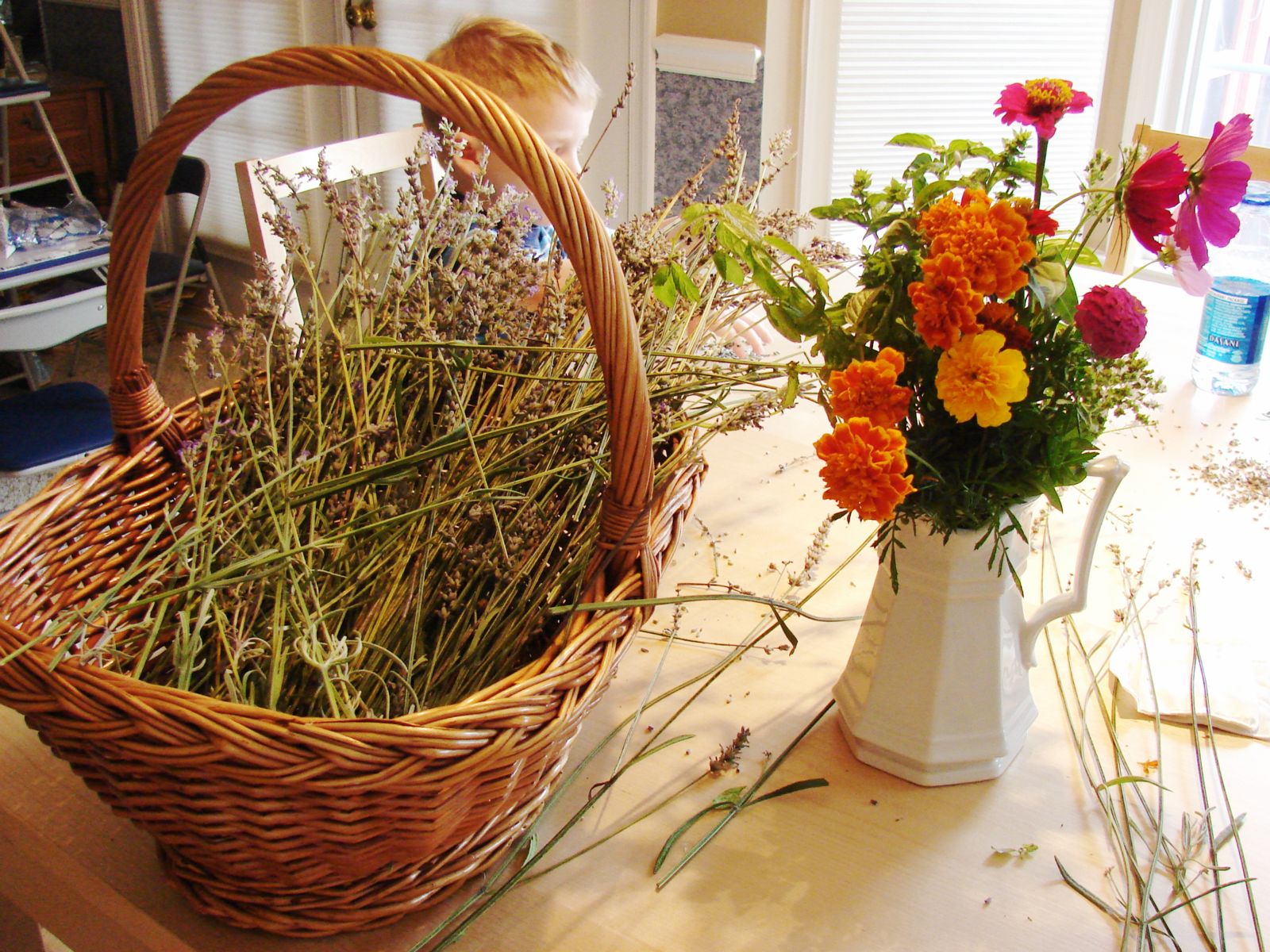 As I mentioned in my previous post, this is high season for our garden, so incorporating foods and herbs that are seasonal fit well into the feast. Tomatoes are not a vegetable, but a fruit, so it is with no apologies that I will feature those beautiful red fruits for the feast. Tomato salsa is definitely in the near future!

But my favorite plant in our garden is the lavender. I have repeated several years incorporating lavender crafts particularly little sachets that even young boys could make. The fragrance while working on these projects was so wonderful—a tangible reminder of the Blessed Virgin Mary! Even if I have no time for a little craft, just simply gathering and hanging bundles of lavender helps us direct our thoughts to Our Lady.

The list is endless for incorporating herbs for feast days: foods, pestos, herbal vinegars, cookies, cakes, teas, soaps, potpourri, etc. One does not need to despair because one feast day isn’t long enough to do little projects. The Assumption begins a series of Marian feasts for thirty days until September 15: 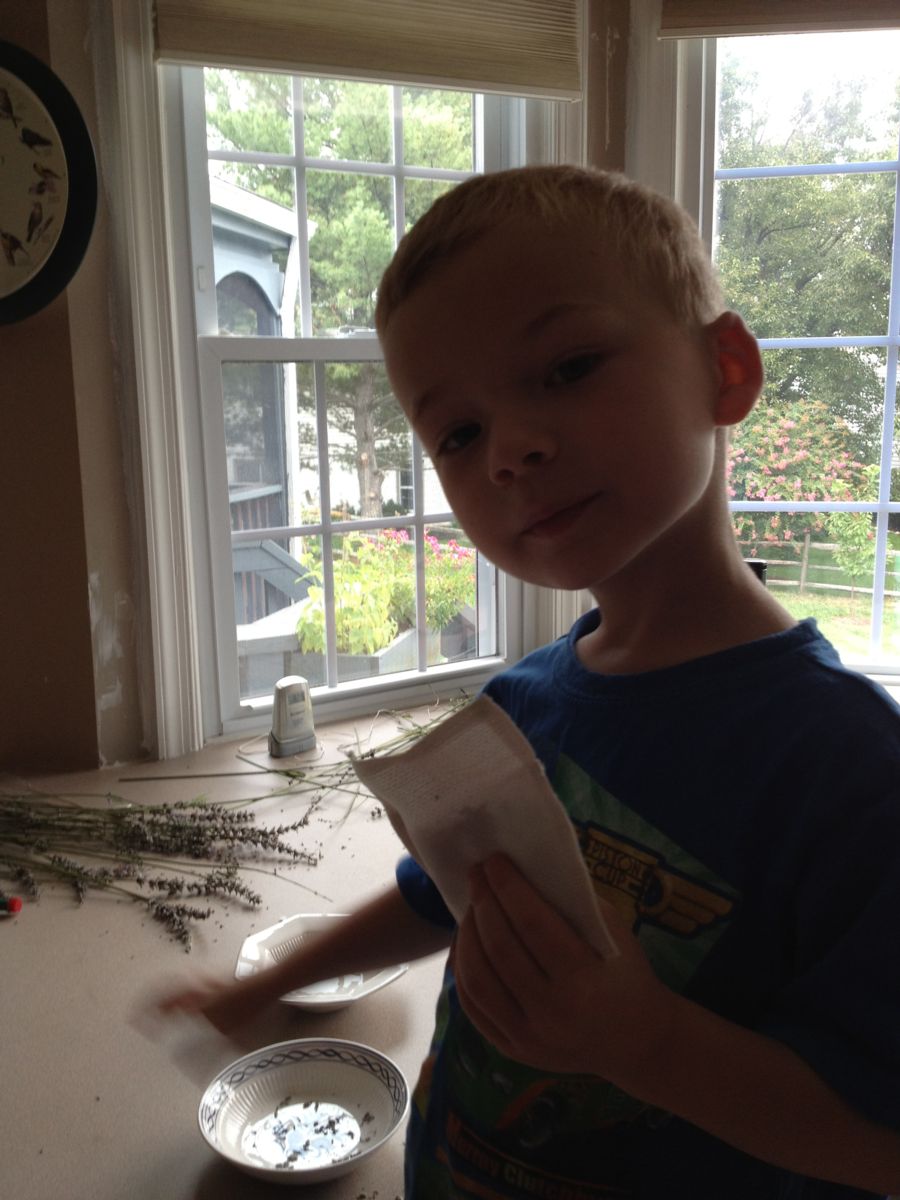 This is an medieval tradition keeping these thirty days:

All through the Middle Ages the days from August 15 to September 15 were called “Our Lady’s Thirty Days” (Frauendreissiger) in the German-speaking sections of Europe. (Father Francis Weiser)

A feast day is short, but the memory and lessons linger. Having “Our Lady’s Thirty Days” gives us further time to focus on Our Lady. There is room for growing in love and knowledge our Blessed Mother during this late summer season, and also time for expansion on crafts or recipes as reflections of Mary during this harvest time.

May you have a blessed feast day. Our Lady assumed into Heaven, pray for us!