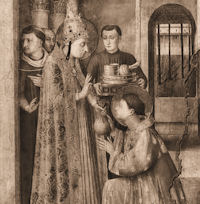 When the holy archdeacon Laurence visited Pope Sixtus, whom they held in prison, he cried out with tears: "Whither art thou gone, father? Why hast thou forsaken thine archdeacon, with whom always thou hast offered the Bloodless Sacrifice? Take thy son with thee, that I may be thy companion in having blood shed for Christ!" St Sixtus answered him: "I have not forsaken thee, my son. I am old and go to an easy death, but yet greater sufferings await thee. Know, that after three days upon our death thou shalt follow after me. And now go, take the church treasury and distribute it to the poor and needy Christians." St Laurence zealously did the bidding of the holy hierarch. Having heard, that Pope Sixtus had been taken to trial with the deacons, St Laurence went there so as to witness their deed, and he said to the holy bishop: "Father, I have already fulfilled thy command, and distributed by hand thine treasury; forsake me not!" Hearing something about treasure, soldiers put him under guard, and the other martyrs were beheaded (+6 August 258). Things to Do:
Find us on Social Media.