Father, you called St. Matthias to share in the mission of the apostles. By the help of his prayers may we receive with joy the love you share with us and be counted among those you have chosen. We ask this through our Lord Jesus Christ, your Son who lives and reigns with you and the Holy Spirit, God, for ever and ever. Amen.

After the Ascension of Jesus, St. Peter proposed to the assembled faithful that they choose a disciple of Christ to fill the place of the traitor Judas in the first missionary band. Lots were drawn, with the result in favor of Matthias. According to one ancient tradition, this missioner labored in Ethiopia and was martyred there. Thus did St. Matthias receive "the crown of life which God has promised to those who love him". The Church venerates St. Matthias on an equal footing with the other Apostles, whose voices resound throughout the world, from generation to generation, giving testimony of what they saw and heard in their life with our Lord. His name is mentioned in the Canon of the Mass.

Before the reform of the General Roman Calendar St. Matthias' feast was celebrated on February 24. St. Boniface's feast is no longer on the calendar in the United States. He was a martyr of Tarsus whose relics were taken to Rome at an early date. Eve of Pentecost 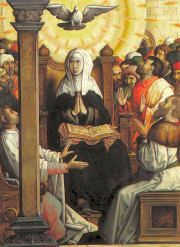 Today is the solemn eve of the great feast of Pentecost. A vigil always implies preparation, a time for cleansing and adorning the soul before the feast. Two themes occupy our attention: a) baptism; b) the graces of Pentecost. In spirit we stand at the font of our baptism to stir up the graces that we once received. There we can meditate upon the pointed words that St. Augustine addressed to a class of neophytes. "Today with the greatest joy Mother Church will give birth to you through holy baptism. By the most sacred sign of the Cross she conceived you in her womb, there she nourishes you and joyfully brings you, her joyful children, to the day of birth. In the holy bath of baptism true light is restored to you."Mother Church is not affected by the punishment inflicted upon Eve who must give birth to her children in pain and sorrow, nor do her children come into the world weeping as those of Eve; you are born with a cry of joy. . . . All the mystery-laden rites that have been performed over you (during your catechumenate) and are still being performed by the ministry of ordained priests, such as the exorcisms, prayers, spiritual songs (psalms), insufflations, penitential garb, bowing the head, prostrations, even the very fear that you experience-all these things are food which should enliven you in the womb so that when reborn in baptism, Mother Church may present you as joyful children to Christ.""You have already received the Creed; this Creed is your mother's protection against the serpent's venom. In John the apostle's Apocalypse it is written that the dragon stood before the woman who was about to bring forth, that when she had brought forth he might devour her son (12:5). You all know that the dragon is the devil; also, that the woman represents the Virgin Mary, who a virgin herself, gave birth to our Virgin Head. She, moreover, is a type of holy Church; for as Mary remained a virgin in giving birth to a Son, so the Church remains virginal although constantly giving birth to new members.""You have vowed to renounce the devil, and in this vow that has been recorded not by men but by God and His angels, you have declared: I do renounce him. Renounce him not merely with words, but in your conduct too; not only with the sound of the voice, but in the acts of daily life; not by the speech of lips alone, but with the loud cry of action. Remember that you have joined battle with a wily, skilled, and inveterate enemy; once you have renounced him, never let him discover his own handiwork in you lest he claim the right to drag you away into servitude. For you shall be detected and brought to light, O Christian, whenever your deeds contradict your vow." — The Church's Year of Grace, Pius Parsch

The virtues, labor, and sufferings of St. Mathias have not been handed down to us: this explains the lack of proper lessons on his life, such as we have for the feasts of the rest of the apostles. Clement of Alexandria records in his writings several sayings of our holy apostle. One of these is so very appropriate to the spirit of the present season, that we consider it a duty to quote it. 'It behooves us to combat the flesh, and make use of it, without pampering it by unlawful gratifications. As to the soul, we must develop her power by faith and knowledge.' How profound is the teaching contained in these few words! Sin has deranged the order which the Creator had established. It gave the outward man such a tendency to grovel in things which degrade him, that the only means left us for the restoration of the image and likeness of God unto which we were created, is the forcible subjection of the body to the spirit. But the spirit itself, that is, the soul, was also impaired by original sin, and her inclinations were made prone to evil; what is to be her protection? Faith and knowledge. Faith humbles her, and then exalts and rewards her; and the reward is knowledge. —Excerpted from The Liturgical Year, Abbot Gueranger O.S.B.Symbols: Halbert; lance; carpenter's square; sword held by its point; axe; saw; scroll; scimitar and book; stone; battle axe; two stones; long cross; hatchet.Patron: Alcoholism; carpenters; reformed alcoholics; smallpox; tailors; diocese of Gary; Indiana; diocese of Great Falls-Billings, Montana; Things to Do:
Find us on Social Media.