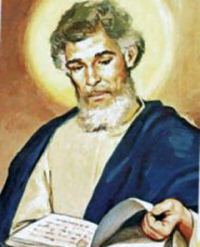 Lord, sustain within us the faith which made Saint Bartholomew ever loyal to Christ. Let your Church be the sign of salvation for all the nations of the world. We ask this through our Lord Jesus Christ, your Son, who lives and reigns with you and the Holy Spirit, one God, for ever and ever. Amen. 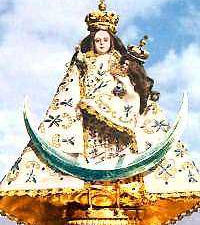 The bishop, in whose hands the entire project of civilizing the people was placed, set up the means and paraphernalia of civilization: the Church, hospital, asylums, workshops and tools, and the framework of administration. He laid out a hundred towns in a planned economy. He took every precaution to assure equity and justice, and he worked to develop their love of one another as children of God. He taught them about their Holy Redeemer and about His blessed mother. He erected the shrine of Our Lady of Health, through whose intercession they were to strive for health of soul and health of body. Every advance they made in virtue, every effort toward decent habits of hygiene and sanitation they were to offer as flowers in a garland to La Purisima.The statue which represented Our Lady of Health came from Europe. The Indians cherished it. They dressed it in elegant robes. They decorated it. They placed it in a chapel shrine. They duplicated it in the wood they carved out of trees. She became a favorite Madonna in western Mexico and northward into the United States. In many places throughout this great extent of territory she is skill a favorite Madonna. In some places her title has changed: In Chihuahua, Mexico, she is Our Lady of Chihuahua; in New Mexico, she is Our Lady of Santa Fe. The name has changed but the devotion and the statue are the same. Excerpted from the Mary Page
Stay in Touch!
Subscribe to Insights...free!
News, analysis & spirituality by email, twice-weekly from CatholicCulture.org.