March 17 is the feast of St. Patrick, and almost everyone knows something about St. Patrick, ranging from some truths, some untruths, some exaggerations and some larger-than-life legends. He wrote very little, and there are prayers attributed to him, such as the Lorica or Deer’s Cry that he might not have written. (Does this sound very similar to St. Francis of Assisi?) This is a Solemnity for Australia, and a Feast in New Zealand, Scotland and Wales. In Ireland it is a solemnity, a holyday of obligation, and a national holiday. Here in America St. Patrick’s Day is an Optional Memorial. I mentioned last week that the priest will be wearing violet/purple vestments on this day. Exceptions will be local calendars or churches that honor St. Patrick as a patron. But even then, the vestments will be white, not green.

Our family has only a bit of Irish blood from either side, so we don’t really celebrate the day with gusto. But I do appreciate the vital contribution of St. Patrick for the spread of Christianity. St. Patrick worked in Ireland in the early 400s, dying around 461 A.D.. He did not wipe out all of paganism in Ireland, but made significant inroads, and really helped establish firm footing for Christianity in Ireland. After Patrick, Irish monasticism was established which played a key role in establishing similar monastic life in other lands, spreading the Faith to pagan lands, and preserving Christianity in the written word.

There are so many varied ways to celebrate this saint’s day, that I will only touch on a few in our Liturgical Year library. I was surprised to find out the wearing of the green tradition comes only 1000 years after his death, according to Father Weiser. My Irish friends usually serve traditional Irish foods, such as Darina Allen of the Ballymaloe Cookery School suggests: Corned Beef and Cabbage and Irish Porter Cake (both of these need to be started Thursday or Friday for Monday’s meal) or perhaps a simple authentic St. Patrick’s Day Cake.

My favorite story from St. Patrick’s life is the first Easter Vigil celebration in Ireland with the Paschal Fire. This was a triumph of Christ the Light over darkness and sin of the druids. To me, remembering Patrick and this triumph foreshadows Easter. The story is told originally in “Muirchu: Life of St. Patrick.” The Catholic Encyclopedia has a synopsis:

It was on 26 March, Easter Sunday, in 433, that the eventful assembly was to meet at Tara, and the decree went forth that from the preceding day the fires throughout the kingdom should be extinguished until the signal blaze was kindled at the royal mansion. The chiefs and Brehons came in full numbers and the druids too would muster all their strength to bid defiance to the herald of good tidings and to secure the hold of their superstition on the Celtic race, for their demoniac oracles had announced that the messenger of Christ had come to Erin. St. Patrick arrived at the hill of Slane, at the opposite extremity of the valley from Tara, on Easter Eve, in that year the feast of the Annunciation, and on the summit of the hill kindled the Paschal fire. The druids at once raised their voice. “O King”, (they said) “live for ever; this fire, which has been lighted in defiance of the royal edict, will blaze for ever in this land unless it be this very night extinguished.” By order of the king and the agency of the druids, repeated attempts were made to extinguish the blessed fire and to punish with death the intruder who had disobeyed the royal command. But the fire was not extinguished and Patrick shielded by the Divine power came unscathed from their snares and assaults. On Easter Day the missionary band having at their head the youth Benignus bearing aloft a copy of the Gospels, and followed by St. Patrick who with mitre and crozier was arrayed in full episcopal attire, proceeded in processional order to Tara. The druids and magicians put forth all their strength and employed all their incantations to maintain their sway over the Irish race, but the prayer and faith of Patrick achieved a glorious triumph. The druids by their incantations overspread the hill and surrounding plain with a cloud of worse than Egyptian darkness. Patrick defied them to remove that cloud, and when all their efforts were made in vain, at his prayer the sun sent forth its rays and the brightest sunshine lit up the scene. Again by demoniac power the Arch-Druid Lochru, like Simon Magus of old, was lifted up high in the air, but when Patrick knelt in prayer the druid from his flight was dashed to pieces upon a rock.

Thus was the final blow given to paganism in the presence of all the assembled chieftains. It was, indeed, a momentous day for the Irish race. Twice Patrick pleaded for the Faith before Leoghaire. The king had given orders that no sign of respect was to be extended to the strangers, but at the first meeting the youthful Erc, a royal page, arose to show him reverence; and at the second, when all the chieftains were assembled, the chief-bard Dubhtach showed the same honour to the saint. Both these heroic men became fervent disciples of the Faith and bright ornaments of the Irish Church. It was on this second solemn occasion that St. Patrick is said to have plucked a shamrock from the sward, to explain by its triple leaf and single stem, in some rough way, to the assembled chieftains, the great doctrine of the Blessed Trinity. On that bright Easter Day, the triumph of religion at Tara was complete. The Ard-Righ granted permission to Patrick to preach the Faith throughout the length and breadth of Erin, and the druidical prophecy like the words of Balaam of old would be fulfilled: the sacred fire now kindled by the saint would never be extinguished.

Our family prefers to attend the Easter Vigil every year. Despite the difficulties of young children at such a long service, to witness the contrast of light and darkness, the new Light of the Paschal Candle, the Light of Christ entering the dark church and spreading, the Exsultet, the blessing of the water, the baptisms, the Litany of the Saints—it is always a moving and memorable night for all of us. Part of our Lent preparations is discussing and reading about the Easter Vigil liturgy, so we can enter more deeply and appreciate it more. St. Patrick’s Day is one of the bridges in that preparation. Two books that can help relay the story of St. Patrick and the Paschal Fire: 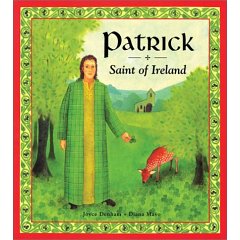 Patrick: Saint of Ireland by Joyce Denham, illustrated by Diana Mayo is a picture book. The illustrations are rich and colorful and completely inviting. Patrick is not pictured in bishop’s traditional garb, and he is said to be a Christian bishop, but there are unique events of his life presented that I really want to emphasize to my sons.

In her opening she portrays the Irish captors as “pirates.” Intertwine pirates in a saint story and I have a captive audience in my sons! The book also incorporates the prayers attributed to St. Patrick into the story, such as the “Deer’s Cry.”

My favorite part is her treatment of the Easter fire and miracle of the deer. It makes this book a perfect tie-in as we discuss the Easter Vigil and the Liturgy of the Light.

Denham also weaves seamlessly some allusions to Scripture, such as “the people who walked in darkness have seen a great light” and “as the deer longs for streams of water, so my soul longs for you, O God”—both fitting in quite nicely in Lent and Easter themes. 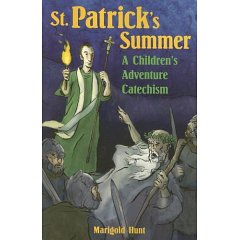 My second recommendation is a classic Catholic chapter book which was reprinted by Sophia Institute Press, St. Patrick’s Summer by Marigold Hunt. I have fond personal memories of reading this book as a young girl; this book provides great mysteries of the Faith in a wonderful narrative style. I actually find it unfortunate that Sophia added “A Children’s Adventure Catechism” to the title. That helps parents to know that the stories unfolds catechetical material, but the title could be offputting for a child who just wants to read a good book. And it is an enjoyable book, with two children trying to understand their Faith getting very confused, and so St. Patrick comes to teach them. His style of teaching is to take them back to historic events and discuss in a living, realistic fashion. There are several other heavenly visitors who also show them past scenes. Instead of a dry catechism, the book is filled with adventure.

As I was rereading the book, I noticed many of the themes covered in the book seem to echo highlights of the Easter Vigil liturgy. The readings of the Vigil retell the story of man’s Redemption, and some of these Old Testament themes are repeated by Hunt: St. Patrick brings the children back to the Easter night with the Paschal fire, then the next visitor is Eve, Mother of All Living, who gives the tale of Creation and Original Sin, and next is Abraham, our father in Faith, discussing Baptism and taking the children to the scene of the parting of the Red Sea, and also the sacrifice scene with his son, Isaac. The other two visitors are those who have died in keeping the Faith, such as St. Cecilia and a martyred priest from England, recalling the baptism and Litany of Saints of the Liturgy. The reader becomes a catechumen, pondering the great mysteries of the Faith, and given the basics on how to live one’s Faith in the world.

Even if you don’t have time to read to read the whole book, the first chapter is the perfect connecting thread as a read-aloud for the Easter Vigil. I get chills every time I read Hunt’s retelling of that Holy Saturday night in Ireland.

While St. Patrick’s Day always falls in Lent, the feast gives a hopeful glimpse at the Easter Vigil a few weeks away. Through St. Patrick’s intercession may we enter more deeply into the spirit of Lent so we may celebrate the Resurrection more fully.