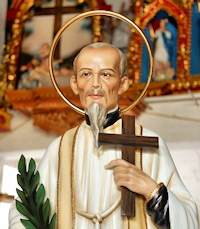 Wednesday of the Fifth Week of Lent: Enlighten, O God of compassion, the hearts of your children, sanctified by penance, and in your kindness grant those you stir to a sense of devotion a gracious hearing when they cry out to you. Through our Lord Jesus Christ, your Son, who lives and reigns with you in the unity of the Holy Spirit, God, for ever and ever.

Blessed are they who have kept the word with a generous heart and yield a harvest through perseverance.

It is one week before the end of Lent, a week from Spy Wednesday. This Mass reminds us that the hatred against Christ was growing, and the plot to kill Him was developing. The three young men in the fiery furnace are a reminder of what Jesus will endure. —The Vatican II Weekday Missal

Today the Roman Martyrology commemorates Saint Phaolo Le Bao Tinh, a convert and priest in modern Vietnam. He was imprisoned for a long period for his faith while still a seminarian. He was the seminary administrator and wrote a book that compiled a catechism with a collection of homilies. He died a martyr by being beheaded on April 6, 1857 in Bay Mau, Hanoi, Vietnam.The Roman Martyrology also commemorate St. Peter Verona, who was born about 1205 at Verona. His parents were Manichaeans, but he was converted and entered the Order of Preachers with the ambition not only of preaching the faith but of giving his life for it. He had his wish, for in the course of his apostolic work he was assassinated by the Manichaeans on the road from Como to Milan in 1252.

Meditation
The debate between Jesus and those participating in the Feast of Tabernacles continues in today’s gospel reading, with the focus now on God’s truth and the breadth of its reach. Jesus declares that those who hold fast to his word “will know the truth, and the truth will make you free.” His listeners—some puzzled, some indignant—respond that, as they are the stock of Abraham, they “have never been in bondage to anyone.” How is it, they demand, “that you say, ‘You will be made free’?” The discussion deteriorates from there, with Jesus’s interlocutors mistakenly imagining that he is calling them bastard children. Yet, in their confusion and misapprehension, they bring us to the heart of the matter, proclaiming, “We have one Father, even God.” To which Jesus responds that, in that case, they ought to esteem him, for “I proceeded and came forth from the Father; I came not of my own accord, but he sent me.”

The Son, the Light of the world, is teaching those in the Temple, and us, that salvation history has entered a new phase: while Israel remains in the truth that belongs by right to the descendants of Abraham (for God does not renege on his covenantal promises), the truth first revealed to Abraham is now being offered universally. And in the Kingdom that is breaking into history in Jesus’s person and mission, abiding in covenantal truth will no longer be a matter of lineage but of faith—an act of faith that, in principle, is open to everyone, thanks to the grace of God offered to all by the Son of God. The power of Trinitarian love and the truth about God’s relationship with his human creation cannot be confined, even if the distinctive role of Israel in witnessing to this truth will remain an essential part of salvation history. Now, however, there will no longer be “Jew or Gentile…slave or free” [Galatians 3:28]. All who adhere to the Son, who reveals the truth about the Father, will be one.This truth that Jesus offers is not something his disciples possess—as, for example, Peter, Andrew, James, and John “possess” certain “truths” about fishing on the Sea of Galilee. On the contrary, the truth of God in Christ seizes and possesses the disciples, reshaping their lives, reordering their priorities, configuring those who embrace it in the imitation of the Son. This is truth with power, and its power is evangelical: this is a truth that must be offered to others and lavishly expended in mission. For the paradox of the truth that Jesus offers is that his presence within us conforms us more closely to him, and its grasp upon us increases the more we give his truth to those who have not yet received it. There are no zero-sum games in the economy of salvation, which is the expression in time of the ever-giving, ever-receiving truth, goodness and beauty of the Holy Trinity. —George Weigel, Roman Pilgrimage: The Station Churches 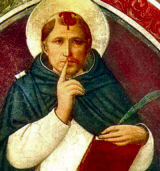 —Excerpted from The Church's Year of Grace, Pius Parsch Patron: Inquisitors.Symbol: Dominican with a large knife in or splitting his head; holding a knife; man with a knife in his head and a sword in his breast.Things to Do:

St. Phaolo Le Bao Tinh
Phaolo was born in 1793 at Trinh-Ha village, Thanh Hoa Province, now Vietnam, to wealthy parents. As a child he studied under a local Confucian scholar, until his parents sent him at twelve years of age to the Catholic seminary at Ke-Vinh.
The seminary described Phaolo as prayerful, ascetical and studious. He enjoyed reading the lives of saints and reminded everyone that they also were called to be saints. He felt called to live as a hermit and left the seminary to live in a cave, surviving on rice and fruit, passing his days in prayer and mortification.

The local Bishop then asked Phaolo to help in the work of bringing missionary priests back to the area. After this, he settled down in the mountains of Laos, mixing missionary work with being a reclusive hermit.When persecution of Christians broke out in 1841, Phaolo was arrested by government officials and he spent the next seven years in prison at Hanoi. Shortly after receiving the death sentence he wrote to a seminarian describing his experience in prison: 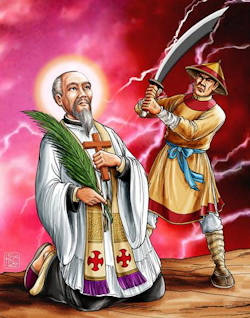 Emperor Thieu Tri in 1848, commuted Phaolo’s sentence from death to perpetual exile in Phu Yen Province. At the end of the same year the new Emperor, Tu Duc, granted an amnesty to all exiles.Phaolo then travelled to the seminary at Ke-Vinh, where he renewed his studies, later being ordained a priest.After exercising his priestly ministry until 1855, some mandarins complained to the governor about Christians and Phaolo was arrested again. For working as a priest, he was classed as a criminal and was sentenced to be decapitated. Early next day he was led to the place of execution. His last words were: "The religion of the Heavenly Master is perfectly true, even though our king and the sovereigns of other nations persecute it and wish to destroy it. But this religion will be victorious, and in the future it will count more adherents than it ever has had in the past." The executioner then came with his sword and the death sentence was carried out.Overall, St Paul’s spirituality had centred on the Cross of Jesus and the practice of prayer and asceticism. St Paul Le-Boa Tinh was canonized a saint by Pope John Paul II in 1988.—Adapted from Prayers4Reparation's BlogThings to Do:

Wednesday of the 5th Week of Lent
Station with San Marcello al Corso (St. Marcellus at the Corso):
The Station today is at the church of St. Marcellus at the Corso. Legend claims that Pope St. Marcellus (308-309) was sentenced by Emperor Maxentius to look after the horses at the station of the Imperial mail on the Via Lata, where the Via del Corso now lies. He was freed by the people, and hidden in the house of the Roman lady Lucina (see also San Lorenzo in Lucina). He was rearrested, and imprisoned in the stables.