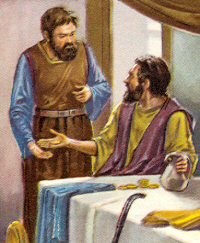 But they were silent; for on the way they had discussed with one another who was the greatest. And he sat down and called the twelve; and he said to them, "If anyone would be first, he must be last of all and servant of all." And he took a child, and put him in the midst of them; and taking him in his arms, he said to them, "Whoever receives one such child in my name receives me; and whoever receives me, receives not me but him who sent me (Mark 9:34-37)."

The feast of St. Januarius, which is ordinarily celebrated today, is superseded by the Sunday liturgy.Click here for commentary on the readings in the 1962 Roman Missal of St. John XXIII.

Sunday Readings
The First Reading is taken from the Book of Wisdom 2:12, 17-20. Against the background of Egyptian worship of animals and mockery of Jewish trust in God, the author devotes much of chapters 1 - 5 to the ineffectiveness of such mockery when God has promised immortality to those who remain faithful.

The Second Reading is from the Letter of St. James 3:16, 4:3. "Where do the wars and where do the conflicts among you come from? Is it not from your passions that make war within your members? You covet but do not possess. You kill and envy but you cannot obtain; you fight and wage war. You do not possess because you do not ask." In this reading St. James tells us to recognize the source of our disagreements.The Gospel is from St. Mark 9:30-37. The Apostles were still very worldly-minded. They were full of the hope that Christ would establish an earthly messianic kingdom, that he would not only free their holy land from the hated pagan rulers but that he would set up a worldwide empire for the people of God. Many of the messianic prophecies of the Old Testament spoke of a worldwide kingdom; all nations would submit to the descendant of David; Jerusalem would be the magnet which would attract all peoples. The prophets, however, were speaking of the true messianic kingdom, the spiritual kingdom that Christ would establish. The Apostles were as yet unable to see the true meaning of these prophecies. They took them as referring to a worldly kingdom. They had come to believe that Christ was the promised Messiah, therefore, he would overcome all enemies and all opposition and set up this kingdom. How, therefore, could his enemies overpower him much less put him to death before he had accomplished his task? Thus they refused to believe his prophecies concerning his coming tortures and death. Now, either in trying to understand what he had so plainly told them, or maybe in putting this disturbing thought far from their minds, they began disputing with one another as to which of them would have the highest post of honor in the earthly messianic kingdom which they had envisaged. How worldly but how human they were! We must not forget though, that they were not yet really Christians — they needed the death and resurrection of Christ to make them what they became — His true followers and loyal disciples. There was in the unformed Apostles a desire to turn Christ's kingdom into an earthly welfare state, rather than into a preparation for heaven. All Christians know that Christ suffered and died for their salvation, and that he asked his followers to take up their cross and follow him if they wished to be his disciples. The first generations of Christians fully understood this and faithfully followed him even to martyrdom. However, as time went on and opposition to the Christian faith disappeared, so too did the zeal and fervor of many Christians. For centuries we have had nominal Christians in Christ's Church -- men and women who tried to make their paradise in this world, and forgot the everlasting heaven. Our own age has seen an unprecedented increase in this falling away of Christians. Leaving aside the parts of Europe which are professedly atheist -- but where in spite of the leaders there are many sincere and devout Christians -- the number of lapsed and nominal Christians in the other Western countries is frightening. These non-practicing Christians, unwilling to carry their crosses, have decided to make this earth their paradise. They want prosperity, comfort and happiness in this world. The vast majority of them, of course, refuse to look to the future; it could be an unpleasant thought, yet they must see that in every town and village there is a mortician, an undertaker who makes a good living disposing of human "remains." Die they must; "and what then?" should be a question which overshadows their lives. Many of these people who in practice have abandoned Christianity, try to salve their consciences by devoting any time they can spare to making this planet a better place in which to live. It is an excellent aim with a possibility of success — if the Fatherhood of God and the true brotherhood of man are upheld. But otherwise it is a vain Utopia. If God, and Christ's teaching are left out of our reckoning, we shall ever have jealousies, enmities, hatred and wars. Christians have made war on Christians because neither side in the struggle was truly Christian. What chance then has the world when Christ and Christianity are banished from it?Today's thought for each one of us is this: Christ became man, suffered and died as man, for our sakes. By his resurrection He conquered death and opened heaven for us. Heaven is our true destiny. Loving God and our neighbor and carrying our cross is the only way to reach heaven. Forget this "heaven on earth" doctrine; it does not and never will exist! Accept Christ and you are accepting the Father who sent Him. He in turn will accept you.--Excerpted from The Sunday Readings by Fr. Kevin O'Sullivan, O.F.M.

On these two (loves) depend the whole code and creed. Each time we walk in (this) law (Introit), we not only avoid. . .contact with the devil (Prayer), but we answer the question: What do you think of. . .Christ? By deeds we profess our faith that He is My Lord (Gospel). We bear with one another in love, because through Baptism God becomes the Father of all (Epistle).--Excerpted from My Sunday Missal, Confraternity of the Precious Blood
Find us on Social Media.