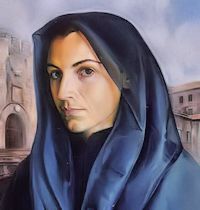 This is my commandment: love one another as I love you. No one has greater love than this, to lay down one’s life for one’s friends. John 15

Today is the feast of recently-canonized Italian educator Saint Rosa Venerini, who founded Catholic schools for girls and young women during the late 17th and early 18th centuries. St. Rosa (also known as St. Rose) was declared a saint in 2006 by Pope Benedict XVI, who spoke in his canonization homily of her courageous work for “the spiritual elevation and authentic emancipation of the young women of her time.” According to the 1962 Missal of St. John XXIII the Extraordinary Form of the Roman Rite, today is the feast of St. Stanislaus, the patron of Poland. He reproached King Boleslaus the Cruel for his dissolute life, and while saying Mass, was put to death by him in 1079. In Poland, his feast is celebrated on May 8, which is the day he died. His feast in the Ordinary Form of the Roman Rite is celebrated on April 11.