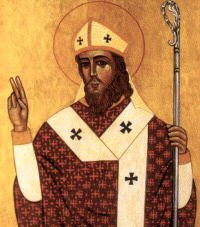 Grant, we pray, almighty God, that we may rightly understand and truthfully profess the divinity of your Son, which the Bishop Saint Hilary taught with such constancy. Through our Lord Jesus Christ, your Son, who lives and reigns with you in the unity of the Holy Spirit, God, for ever and ever.
show 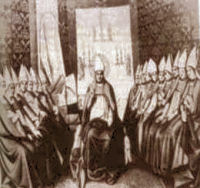 Also known as Remi, he was born at Laon, the son of Count Emilius of Laon and St. Celina. He became known for his preaching, and in 459, when he was only twenty-two, he was appointed bishop of Rheims. He was ordained and consecrated and reigned for more than seventy years, devoting himself to the evangelization of the Franks. In 496, Clovis, pagan King of northern Gaul, supposedly in response to a suggestion by his wife, Clotildis, a Christian, invoked the Christian God when the invading Alemanni were on the verge of defeating his forces, whereupon the tide of battle turned and Clovis was victorious. St. Remigius, aided by St. Vedast, instructed him and his chieftains in Christianity, and soon after baptized Clovis, his two sisters, and three thousand of his followers. Remigius was a zealous proponent of orthodoxy, opposed Arianism, and converted an Arian bishop at a synod of Arian bishops in 517. He was censured by a group of bishops for ordaining one Claudius, whom they felt was unworthy of the priesthood, but St. Remigius was generally held in great veneration for his holiness, learning, and miracles. He was the most influential prelate of Gaul and is considered the apostle of the Franks. He died at Rheims on January 13.

—Dictionary of Saints, John J. DelaneyPatron: France.Symbols: Oil stock; dove with Holy Ampulla in its beak; birds; veil of St. Veronica; font; broken fetters.
Often Portrayed As: Dressed as a bishop with a miter and staff with a cross and is holding the oil of the sacred phial in his right hand with a dove hovering over. For centuries the events at the crowning of Clovis I became a symbol used by the monarchy to claim the divine right to rule. Things to Do: