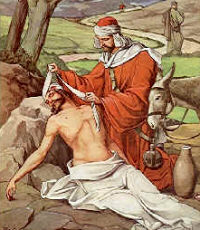 "A sower went out to sow. And as he sowed, some seed fell on the path, and birds came and ate it up. Some fell on rocky ground, where it had little soil. It sprang up at once because the soil was not deep, and when the sun rose it was scorched, and it withered for lack of roots. Some seed fell among thorns, and the thorns grew up and choked it. But some seed fell on rich soil and produced fruit, a hundred- or sixty- or thirty-fold. Whoever has ears ought to hear" (Matt 13:3-9).

The feast of Saints Louis and Zélia Martin, which is ordinarily celebrated today, is superseded by the Sunday liturgy.Click here for commentary on the readings in the Extraordinary Form of the Roman Rite.

Sunday Readings
The first reading is taken from the Book of the Prophet Isaiah 55:10-11. The word of God which came to the Chosen People through the prophets, and the divinely inspired writers, came out of God's loving interest in His people. He wanted to prepare them for the inheritance, the real "promised land," that, when the messianic age (the "fullness of time") came, would be theirs, provided their lives on earth were lived as they should be. — The Sunday Readings by Fr. Kevin O'Sullivan, O.F.M.

The second reading is from the Letter of St. Paul to the Romans 8:18-23 and is about present suffering and the glory of God. Suffering is an essential part of the Christian life and one who truly believes will have his or her share of hardships and trials. Yet, these are not ends in themselves, as there is hope that they will terminate with the full revelation of the glory of God. The theme and message of St. Paul is not to lose hope in the Lord into whose risen life we have been initiated by Baptism. — A Celebrants Guide to the New Sacramentary - A Cycle by Kevin W. IrwinThe Gospel is from St. Matthew 13:1-23. Christ's description of His audience, that day in Galilee, is unfortunately as true today as it was then. His message of salvation has been preached to a great part of the world's population, but the proportion of those who accept it and live up to it, is about the same today as it was then. There are millions of men and women today, in what was once Christian Europe, who are like the seed sown on the unplowed path. They refuse to accept the message, they have no thought for their future, they are content to end in the grave after their few years of misery and hardship on this planet.There are others who see the truth and the consolation of the Christian gospel, but when it comes to making sacrifices for it, they give up. The message did not sink into their hearts and minds. They are like the seed which fell on rocky ground because the faith had no deep roots in their lives. Others again, and they are legion, are like the seed that fell among the briars and thorns. They accepted the faith and it took root in them, but later on, "the cares of the world and the delight in riches chokes the word and it proves unfruitful,"—these are our Lord's own words. 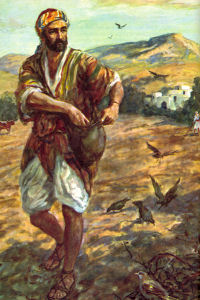 The last class of Christians, are like the seed sown on good soil. They not only accept Christ and his teaching, but they live up to it, and, come what may, they are faithful to it. These will produce fruit and will earn for themselves eternal happiness. Each one of us can look into his own conscience today and discover to which class he or she belongs. Are some of us perhaps, like the seed that fell on the rocky ground? While Christianity makes no very difficult demand we are all for it, but when it demands mortification, the curbing of passion, real sacrifices for our neighbor, do we forget our Christian calling then and ignore its precepts? And how does our type of Christianity stand up to the temptations of the world—the desire to get all the enjoyment we can out of this life, licit or illicit, breaking God's commandments weekly or maybe daily? Are we chasing after wealth and power, using all our energies to rise in the world to be above our neighbor by fair or foul means? If the above are our aims in life, our Christianity has been or is being choked out of us. There are millions of saints in heaven today, enjoying eternal happiness, who had some, if not all, of our present failings. We, too, can be with them one day, provided we do what they did. They repented sincerely and remained God's close friends, until he called them to himself. May the merciful God give us the grace to imitate them while we yet have time. Excerpted from The Sunday Readings by Fr. Kevin O'Sullivan, O.F.M.

"I have compassion on the crowd." Some of us may "have (had to) come from a distance" in our wanderings from God. But this sentiment of His Heart, so Divine, so human, inspires our plea to "save" us from eternal hunger in "the pit" of hell (Introit).At Baptism we were reborn to a new life, to be "dead to sin, but alive to God" (Epistle). Daily with Christ we must die to sin and evil. Daily with Him we must rise to God and good works. Daily we would "faint on the way," famished with hunger, crying out: "How will anyone be able to satisfy (us in (the) desert" of life(Gospel)?At the altar of sacrifice God will not allow the hopes of anyone to be "in vain" (Secret). Only at the altar will our instinctive hunger for God be really "filled" (Postcommunion).Excerpted from My Sunday Missal, Confraternity of the Precious Blood