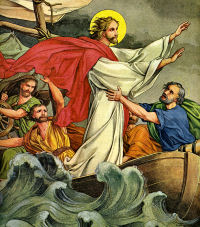 Father, guide and protector of your people, grant us an unfailing respect for your name, and keep us always in your love. Grant this through our Lord Jesus Christ, your Son, who lives and reigns with you and the Holy Spirit, God, for ever and ever. Amen.

Jesus said to the Twelve: "Fear no one. Nothing is concealed that will not be revealed, nor secret that will not be known. What I say to you in the darkness, speak in the light; what you hear whispered, proclaim on the housetops. And do not be afraid of those who kill the body but cannot kill the soul; rather, be afraid of the one who can destroy both soul and body in Gehenna" (Matt 10:26-28).

Today is the feast of St. Aloysius Gonzaga which is superseded by the Sunday Liturgy.Click here for commentary on the readings in the Extraordinary Form of the Roman Rite.Sunday Readings
The first reading is taken from the Book of the Prophet Jeremiah 20:10-13. This reading has the tone and force of a lamentation psalm where persecutors are all around the just man, and his only strength is the Lord himself. — A Celebrants Guide to the New Sacramentary - A Cycle by Kevin W. IrwinThe second reading is from the Letter of St. Paul to the Romans 5:12-15. St. Paul is speaking of some of the immediate effects of Christian salvation, as brought to mankind by Christ. St. Paul stresses the fact that Christ through his death not only conquered sin but poured out divine grace so abundantly and lavishly on mankind, making them his brothers and therefore sons of God, that there is no comparison between the world redeemed by Christ's death and the world of sin which prevailed up to then. — The Sunday Readings by Fr. Kevin O'Sullivan, O.F.M.The Gospel is from St. Matthew 10:26-33. What our Lord said to His Apostles applies to all Christians in the practice of their faith. By the very fact of living our faith openly and fully we are apostles by example. If we are always truthful and faithful to our promises, if we are honest in all our dealings, if as employers we pay a just wage and treat those working for us not as "hands" but as whole men and women, if as employees we give an honest day's work for an honest day's pay, if we live chaste lives whether in single life or in marriage, we are true Christians. Above all, if we have true love of God and show our appreciation of all that he has done for us, and if we prove that love, by helping his other children, our neighbors, we are a light shining in the darkness, because we are helping others to see the true meaning of the Christian religion. This true light is needed more today perhaps than ever before. Our world is three quarters pagan or neo-pagan. The neo-pagans are those who once were Christians but abandoned their religion, sometimes through their own fault, but more often than not, because of the bad example they were given by their fellow Christians. These are worse off spiritually than the pagans who have never heard of Christ or the true God. These latter have at least some idols, some ancestral deities, to whom they pay respect. The neo-pagans have only themselves to venerate, and they can find little spiritual uplift in this form of religion.A large majority of today's teenagers, in most so-called Christian countries, have come to despise, or at least to neglect, the religion of their ancestors. In most cases the cause of this is that Christianity was never really put into practice in their own homes. There are cases of very black sheep coming out of very white Christian homes, but these are cases of weak personality—they prefer to follow the mob rather than try to force their way against it. On the whole, the decline of religion among today's youth is due to bad example from their elders.In today's gospel message, our Lord is asking each one of us to be a fearless apostle. We will be, if we live up to our religion at home and abroad. "Have no fear of men," He tells us, "don't mind what your fellowmen think of you, if you object to obscene language in your work-place. Don't fear what will be thought of you if you say your grace before and after meals in a public restaurant or hotel. Don't take that extra drink just because your companions at the party might ridicule your control ..."These acts and many others like them, may seem trivial to some but they are giving testimony to the faith that is in us. Those who scoff at such things at first, may begin later to look into their own hearts, and come to realize what it is to be a man of principle. Eventually they may become men of principle themselves.Let us remember our Lord's promise "Everyone who acknowledges me before men, I also will acknowledge before my Father who is in heaven." Excerpted from The Sunday Readings by Fr. Kevin O'Sullivan, O.F.M.

Commentary for the Readings in the Extraordinary Form:
Third Sunday after Pentecost

"Rejoice with me, because I have found my sheep that was lost'. . .There will be joy in heaven oer one sinner who repents, more than over ninety-nine just who have no need of repentance" (Gospel).

"The Sacred Heart for the world, the world for the Sacred Heart," was the theme of last Friday's Feast. Today we witness the mutual search between the Divine Heart and our heart.In the Introit the sinner voices his sense of being "alone" in his inner struggles, so often beyond all human aid. This life is a warfare against "your adversary the devil;" nevertheless be "steadfast in the faith;" hear the call to resist." Ultimate victory is "in Christ Jesus" (Epistle).Who of us could ever doubt the Love of the Sacred Heart after reading this Gospel? Who of us on earth would not add to His joy in heaven by leading some soul back to His Sacred Heart?Excerpted from My Sunday Missal, Confraternity of the Precious Blood
Find us on Social Media.