Monday of the Sixth Week of Easter; Optional Memorial of St. John I, pope and martyr

O God, who reward faithful souls and who have consecrated this day by the martyrdom of Pope Saint John the First, graciously hear the prayers of your people and grant that we, who venerate his merits, may imitate his constancy in the faith. Through our Lord Jesus Christ, your Son, who lives and reigns with you in the unity of the Holy Spirit, God, for ever and ever.
show

According to the 1962 Missal of St. John XXIII the Extraordinary Form of the Roman Rite, today is the feast of St. Venantius, who was born at Camerino in Umbria, and was led at the age of fifteen before Antiochus, governor of the town under the Emperor Decius. He was made to suffer cruel torments, but angels came and assisted him. His tormentors were touched with repentance by his constancy and many were converted. He was beheaded around the year 250. His body lies at Camerino in the church dedicated to him. St. John I's feast in the Ordinary Form of the Roman Rite is celebrated on May 27. 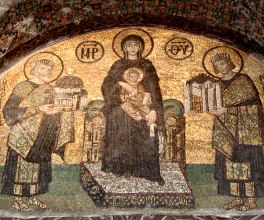 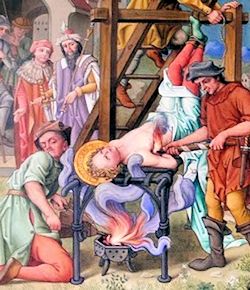 Venantius was then carried before the governor, who, unable to make him renounce his faith, cast him into prison with an apostate, who vainly strove to tempt him. The governor then ordered his teeth and jaws to be broken, and had him thrown into a furnace, from which the angel once more delivered him. The Saint was again led before the judge, who at sight of him fell headlong from his seat and expired, crying, "The God of Venantius is the true God; let us destroy our idols." This circumstance being told to the governor, he ordered Venantius to be thrown to the lions; but these brutes, forgetting their natural ferocity, crouched at the feet of the Saint. Then, by order of the tyrant, the young martyr was dragged through a heap of brambles and thorns, but again God manifested the glory of His servant; the soldiers suffering from thirst, the Saint knelt on a rock and signed it with a cross, when immediately a jet of clear, cool water spurted up from the spot.This miracle converted many of those who beheld it, whereupon the governor had Venantius and his converts beheaded together in the year 250. The bodies of these martyrs are kept in the church at Camerino which bears the Saint's name.Excerpted from Lives of the Saints, by Alban Butler, Benziger Bros. ed. [1894] Patron: Camerino, Italy.Symbols: Roman armour; banner; plan of Camerino; fountain.
Often portrayed as: Young man crucified upside-down with smoke coming from his head; young man holding the citadel of Camerino; young man holding the city of Camerino, a palm, and a book; young man with a banner holding a city wall.Things to do: