Grant, we ask, almighty God, that the Nativity of the Savior of the world, made known by the guidance of a star, may be revealed ever more fully to our minds. Through our Lord Jesus Christ, your Son, who lives and reigns with you in the unity of the Holy Spirit, God, for ever and ever.

According to the 1962 Missal of St. John XXIII the Extraordinary Form of the Roman Rite, today is the feast of St. Hyginus. During the four years of his pontificate (138-142), he had to oppose the heresy of Valentinus who at this period came to propagate his errors in the heart of the Christian community in Rome.

It is also historically the feast of St. Theodosius, abbot, born in Cappadocia in the village of Magarisso, who after having endured great sufferings for the Catholic faith, took his rest in peace at the monastery which he had erected on a lonely hill in the diocese of Jerusalem. 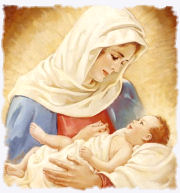 In Mexico El Día de Los Tres Reyes (Day of the Three Kings) celebrates the arrival of Gaspar, Melchior, and Balthazar at the place of Jesus' birth.

The day is also known as El Día de Los Reyes Magos (Magi) in Spanish and Epiphany in English commemorates the divinity of Christ as manifested to the Magi, the kings who brought him gifts.

On the night before El Día de Los Reyes, the children fill their shoes with hay and leave them outside. It is believed that the Wise Men will stop at each home to feed their horses, leaving gifts in exchange for hay.

Finally, El Día de Los Reyes arrives, and the whole family wakes up to open the gifts left by the Three Kings. However, this is only the beginning. On that day, family and friends gather, while the children keep busy playing with their new toys.

The adults continue with the day's activities by preparing a big dinner and serving a very special dessert, a bread known as La Rosca de Reyes or Three Kings Bread. — by Frances Chaparro, Estela Muñoz and Adrian Zamilpa

The crown of the empire belonged to Antonius Pius. Hyginus, as Telesphorus' successor, not only had to endure his relentless persecutions but also had to cope with the heretics who made their way to Rome.

Hyginus was a Greek from Athens who, like his contemporary Justin Martyr, was a philosopher. He is said to have done some organizing of the clergy, and it is likely that he addressed the Roman clergy on the subjects of sin in general and of obedience to the Church.

The emergence of Gnosticism is probably the most significant development of Hyginus' pontificate. Cerdo came from Syria and Valentinus from Egypt, and together they taught this system of mystical belief, which was a combination of Greek philosophy and Oriental superstitions regarding Christ. For years Cerdo vacillated between teaching error and repenting, returning to the Church, then falling from grace. Valentinus, however, staunchly defended his cause. Hyginus perceived this as heresy, for it deviated greatly from the true teachings of the Apostles.

Hyginus was said to have suffered gloriously and he was buried on Vatican Hill.

Symbols and Representation: abbot hermit with iron bands on his neck and arms, chains and a money bag near him

St. Theodosius was so inspired by Abraham's example of leaving his loved ones and homeland for God that he left his homeland of Cappadocia to make a pilgrimage to Jerusalem. There St. Theodosius took as his guide the holy man Longinus, who placed him in charge of a church near Bethlehem. Theodosius did not stay there long, however, but he went to live in a cave on a nearby mountain. He was known for his holiness, and many desired to dedicate their lives to God as monks under Theodosius. He built a monastery at Cathismus, as well as three hospices: for the sick, the elderly and the mentally ill. When Emperor Anastasius was persecuting Christians who did not accept the Eutychian heresy, which states that Christ has only one nature, St. Theodosius preached orthodoxy throughout Palestine, even stating from the pulpit in Jerusalem: "If anyone receives not the four general councils as the four gospels, let him be anathema." The Saint renewed the courage of those in whom the Emperor's edicts had instilled fear. Anastasius banished Theodosius, though he was later recalled by Anastasius' successor. Theodosius died at the age of 105; many miracles occurred at his funeral.

Symbols and Representation: abbot hermit with iron bands on his neck and arms, chains and a money bag near him