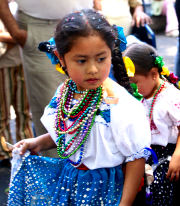 In Mexico, Christmas is an important holiday season with strong traditions. One of the most colorful traditions is the posada party, celebrated every evening from December 16 to 24. These celebrations commemorate Mary and Joseph's cold and difficult journey from Nazareth to Bethlehem in search of shelter. "Posada" in Spanish, simply means lodging or shelter. Nowadays, the posada has evolved into a religious and social celebration, paying a festive homage to the journey.

Each one of these nights before Christmas, a party is held in a home in the neighborhood. There is plenty of food and drink, with candies and fruit for the children. At dusk, all the guests gather outside the house. A small child dressed as an angel leads, followed by children carrying figures of Mary and Joseph. Boys and girls dressed in silver and gold robes constitute the procession, followed by the adults and musicians. Everyone sings melodious songs as they walk slowly along, carrying their lit candles. When they reach the house, the group divides in two. One half remains outside and begs for shelter from the other half, which is inside the house. The doors are then opened, the religious part of the celebration ends, and the fun begins.

The happy end to each posada has always been the piñata. A piñata is a fragile earthenware jar covered with paper mache, traditionally made in the shape of a star, to recall the one that so mysteriously guided the Three Kings to the newborn Jesus. Now piñatas come in all shapes and sizes and are filled with candy, toys, and sometimes money.

In the old days, the last posada held on December 24 was most popular, because it was followed by midnight Mass. In the provinces of Mexico, this tradition lives on.

Celebrate with your family and friends the Mexican tradition of Los Posadas. Before we bid farewell to the Christmas season it's a good time to reenact the Christmas story. It might not be possible to go from house to house but you could process from room to room singing or outside at the different doors of your home. You can dress a couple of children as Mary and Joseph and have them knock on the doors asking for shelter. Once the procession is over you can finish with a pinata and refreshments. To add to the party dress in colorful Mexican garb.