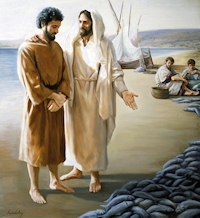 May your people exult for ever, O God, in renewed youthfulness of spirit, so that, rejoicing now in the restored glory of our adoption, we may look forward in confident hope to the rejoicing of the day of resurrection. Through our Lord Jesus Christ, your Son, who lives and reigns with you in the unity of the Holy Spirit, God, for ever and ever.

"When it was already dawn, Jesus was standing on the shore; but the disciples did not realize that it was Jesus." For the third time Jesus appears to His disciples and on the lake of Genesareth renews the miraculous draught of fishes. The Fathers did not fail to see in the one hundred and fifty-three great fishes that Peter brought to land the neophytes born to supernatural life in the waters of baptism and brought by Peter to the feet of the risen Christ.

Sunday Readings
The first reading is taken from the Acts of the Apostles, 5:27-32, 40b-41. The Apostles' failure to obey the Sanhedrin is obviously not due to pride or to their not knowing their place; the Sanhedrin is imposing a ruling which would have them go against God's law and their own conscience.

The second reading is from the Book of Revelation, 5:11-14. The host of angels around the throne act as a kind of guard of honor proclaiming the sublime perfection of Christ the Lamb; they list seven attributes which all point to the fact that he has everything that belongs to the Godhead. 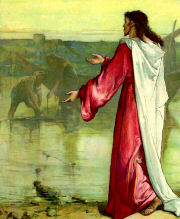 The Gospel is from St. John, 21:1-19, The primary purpose in recounting this appearance of the Risen Christ to his Apostles, was to stress the actual conferring of the Primacy on Peter. From this very first meeting with Christ at the Jordan (Jn. 1:42) the Savior had told him that his name Simon bar-Jonah would be changed to Cephas, which means Rock. Some year or so later, at Caesarea Philippi, this change took place when Christ said to Simon, "You are (Peter) Rock. and upon this Rock I will build my Church . . . and I will give you the keys of the kingdom of heaven" (Matt. 16:18-19).This promise, that Simon would be the foundation, the source of strength and unity, in the new Christian community, was made factual on the occasion described here by John. Christ uses a new metaphor—Simon (Peter) is to be the new shepherd—he would take the place of Christ, as head and director of the Christian flock. He would provide protection and pasturage for Christ's sheep and lambs. He would, in other words, be the keeper and head of Christ's Church.That this position of authority was recognized by his fellow Apostles and by the first Christians, is evident in almost every page of the Acts—the book which describes the infant Church. It was Peter who presided at the election of Matthias, who succeeded Judas in the apostolic college (Acts 1:15-26): he gave the first Christian sermon after the descent of the Holy Spirit (2: 14-40); he worked the first recorded miracle wrought by any Apostle (3:1-11); he pronounced sentence on Ananiah and Sapphira (5:1-11); it was he who received the first Gentile convert into the Church (11:1-18) and it was he who defended Paul's action at the Council of Jerusalem (15:6-11).In face of such evidence no serious historian can doubt but that the other Apostles and the first Christians saw in Peter the living head of the Church, the representative of Christ. The Church in the succeeding generations and centuries saw the successor of Peter, and the living representative of Christ in the occupant of the See of Rome, the bishopric held by Peter, when he was martyred for the faith. History is witness to this.There were Christians who refused obedience to him, but not one of them claimed for himself the privilege of Peter and his successors. That the Church, the society founded by Christ to bring salvation to the world, should need a visible Head on earth, needs no further (and has not stronger) proof than that Christ himself saw it as necessary and arranged it accordingly. The power of the keys, given to Peter, were more necessary in the second and succeeding generations than in Peter's day, when the other Apostles were still alive. When Christ laid the foundation of his Church on a Rock. it was to be a Rock that would last as long as the Church. Peter died, but Peter's office will last until the last man goes to heaven. The Sheep and the Lambs of the twentieth and thirtieth centuries have as much need of pasturage and protection as, if not more than, those of the first century. Christ, our Savior and our Good Shepherd, provided for all time.Excepted from The Sunday Readings, Fr. Kevin O'Sullivan, O.F.M.

Jesus organized the visible Church along the lines of a sheepfold. St. Peter, first shepherd of the visible Church, depicts Jesus as the invisible "Shepherd. . .of your souls" (Epistle). He tenderly remembers all that Jesus suffered for us "Sheep going astray."On Catacomb walls, early Christians delighted to draw pictures and to wrote explanations of the perfect understanding and love between the Good Shepherd and His sheep, such as that which exists between the "Father" and "Me."We are not only fed through the visible guidance of His Church, but also through the invisible grace of the Sacraments, especially "in the breaking of bread" (Alleluia Verse).Excerpted from My Sunday Missal, Confraternity of the Precious Blood
Find us on Social Media.