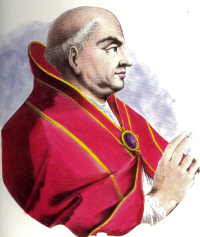 Grant, almighty God that we may withstand the trials of this world with invincible firmness of purpose, just as you did not allow your Martyr Pope Saint Martin the First to be daunted by threats or broken by suffering. Through our Lord Jesus Christ, your Son, who lives and reigns with you in the unity of the Holy Spirit, God, for ever and ever. 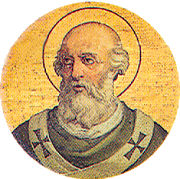 A staunch defender of the orthodox, Martin immediately convened a synod in the Lateran. Attended by 105 Western bishops, the synod studied all aspects of Monothelitism and the emperor's Type. After nearly a month, the synod reached a conclusion. They determined that there were two wills in Christ, condemned the One Will heresy, and further condemned Constans' Type for boldly prohibiting the truthful teachings of the apostles. In an effort to pacify the emperor, Martin acknowledged Constans' good intentions in trying to unify the Church and placed the burden of responsibility on the poor advice of Constantinople's patriarchs.Constans, far from appeased, was determined that his religious policies would not be ignored. Appointing his chamberlain Olympius as exarch to Italy, he dispatched him with the order to obtain the signatures of acceptance from all Italians without exception. Olympius proved to be a dismal failure, both in his mission and in an attempted assassination of the popular pope. The exarch prudently abandoned his post and fled to Sicily to fight the invading Muslims.In the summer of 653, the furious emperor appointed yet another exarch, Theodore Calliopas, with orders to escort the inflexible pontiff to Constantinople. Calliopas and his officers boldly entered the Lateran, arrested the bedridden Martin, and presented the clergy with Constans' edict deposing the pope who had been consecrated illegally. The voyage, which took nearly three months, subjected the sickly pope to humiliation and abuse. Arriving in Constantinople, racked with dysentery and disabled by gout, Martin was placed in solitary confinement. On December 19, 653, Martin was brought to trial on trumped-up charges of treason and sacrilege. The pope, near death and realizing his position futile, could only laugh at the ridiculous accusations and beg the emperor to excuse the fumbling witnesses before they added perjury to false witness! Constans pronounced the predetermined verdict of guilty on the pontiff and sentenced him to public flogging and death. The disapproving crowd watched, horrified; and it was only by the dying Patriarch Paul's intercession that Martin's sentence of public execution was commuted to banishment.For nearly three months, the pope suffered under the worst conditions in a Byzantine prison before he was exiled to the Crimea. There, on September 16, 655, suffering from cold and starvation, Pope Martin gratefully met his God. Pious Martin had been disgraced in life but later became honored as a martyr. Today he is venerated as a saint; his feast is celebrated by both the Roman and Greek Churches on April 13. —The Popes: A Papal History, J.V. BartlettSymbols: Pope holding money; Pope with geese around him (possible confusion by artist with Martin of Tours); Pope in a prison cell.Things to Do: 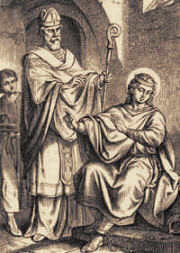 Tortures and bribes were in turn employed to shake his faith, but Hermenegild wrote to his father that he regarded the crown as nothing, and preferred to lose scepter and life rather than betray the truth of God. At length, on Easter night, an Arian bishop entered his cell, and promised him his father’s pardon if he would receive Communion from his hands. Hermenegild indignantly rejected the offer, and knelt with joy for his death-stroke, praying for his persecutors. The same night a light streaming from his cell told the Christians keeping vigil nearby that the martyr had won his crown and was celebrating the Resurrection of the Lord with the Saints in glory.King Leovigild, on his death-bed, was changed interiorly. He had been witness to the miracles that had occurred after his son’s cruel death, and he told his son and successor Recared to seek out Saint Leander, whom he himself had persecuted. Recared should follow Hermenegild’s example, said the king, and be received by the bishop into the Church. Recared did so; and although his father himself had not had the courage to renounce the false faith publicly, after his father’s death the new king labored so earnestly for the extirpation of Arianism that he brought over the whole nation of the Visigoths to the Church. “Nor is it to be wondered,” says Saint Gregory, “that he came thus to be a preacher of the true faith, since he was the brother of a martyr, whose merits helped him to bring so many into the haven of God’s Church.” —Little Pictorial Lives of the SaintsPatron: Converts.Symbols: Young prince in armour being borne to heaven while contemplating the crucifix while around him angels carry an axe; chains; royal regalia; a palm; and a rose wreath and heretical bishops and king stand below him; prince with an axe.Things to Do: