Tuesday of the Eighth Week of Ordinary Time 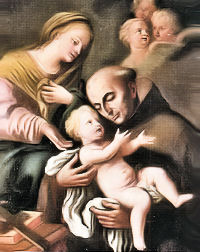 Historically today is the feast of St. John Joesph of the Cross who was born on the Island of Ischia in Southern Italy. At the age of sixteen years he entered the Order of St. Francis at Naples, amongst the Friars of the Alcantarine Reform, being the first Italian to join this reform which had been instituted in Spain by St. Peter of Alcantara. In 1674 he was sent to found a friary at Afila, in Piedmont; and he assisted with his own hands in the building. Much against his will , he was raised to the priesthood. In 1702 he was appointed Vicar Provincial of the Alcantarine Reform in Italy. He was beatified in 1789, and canonized in 1839.

Preparing for Lent
No Lent is worthy of the name without a personal effort of self-reformation, of leading a life more in accordance with God's commands and an attempt by some kind of voluntary self-denial to make reparation for past negligence. But the Church, together with the personal effort which she requires of all of us, her children, sets up in the sight of God the cross of Christ, the Lamb of God who took upon Himself the sins of man and who is the price of our redemption. As Holy Week approaches the thought of the passion becomes increasingly predominant until it occupies our whole attention, but from the very beginning of Lent it is present, for it is in union with the sufferings of Christ that the whole army of Christians begins on the holy "forty days", setting out for Easter with the glad certitude of sharing in His resurrection.

"Behold, now is the acceptable time, behold, now is the day of salvation." The Church puts Lent before us in the very same terms that formerly she put it before the catechumens and public penitents who were preparing for the Easter graces of baptism and sacramental reconciliation. For us, as it was for them, Lent should be a long retreat, one in which under the guidance of the Church we are led to the practice of a perfect Christian life. She shows us the example of Christ and by fasting and penance associates us with his sufferings that we may have a share in His redemption.We should remember that Lent is not an isolated personal affair of our own. The Church avails herself of the whole of the mystery of redemption. We belong to an immense concourse, a great body in which we are united to the whole of humanity which has been redeemed by Christ. The liturgy of this season does not fail to remind us of it. This, then, is the meaning of Lent for us: a season of deepening spirituality in union with the whole Church which thus prepares to celebrate the Paschal mystery. Each year, following Christ its Head, the whole Christian people takes up with renewed effort its struggle against evil, against Satan and the sinful man that each one of us bears within himself, in order at Easter to draw new life from the very springs of divine life and to continue its progress towards heaven.Excerpted from The Saint Andrew Daily Missal

One day Saint John Joseph was found in the chapel in ecstasy, raised far above the floor. He won the hearts of all his religious, and became a priest out of obedience to his Superiors. He obtained what seemed to be an inspired knowledge of moral theology, in prayer and silence. He assisted at the death of his dear mother who rejoiced and seemed to live again in his presence, and after he had sung the Mass for the repose of her soul, saw her soul ascend to heaven, to pray thereafter their God face to face.With his superiors’ permission he established another convent and drew up rules for the Community, which the Holy See confirmed. Afterward he became a master of novices vigilant and filled with gentleness, and of a constantly even disposition. Some time later he was made Provincial of the Province of Naples, erected in the beginning of the 18th century by Clement XI. He labored hard to establish in Italy this branch of his Order, which the Sovereign Pontiff had separated from the same branch in Spain. His ministry brought him many sufferings, especially moral sufferings occasioned by numerous calumnies. Nonetheless, the Saint succeeded in his undertakings, striving to inculcate in his subjects the double spirit of contemplation and penance which Saint Peter of Alcantara had bequeathed to the Franciscans of the Strict Observance. He gave them the example of the most sublime virtues, especially of humility and religious discipline. God rewarded his zeal with numerous gifts in the supernatural order, such as those of prophecy and miracles.Finally, consumed by labors for the glory of God, he was called to his reward. Stricken with apoplexy, he died an octogenarian in his convent at Naples, March 5, 1734. Countless posthumous miracles confirmed the sanctity and glory of the Saint, and he was canonized in 1839 by Pope Gregory XVI.Excerpted from Lives of the Saints for Every Day of the Year, edited by Rev. Hugo Hoever, S.O. Cist., Ph.D.Things to Do: