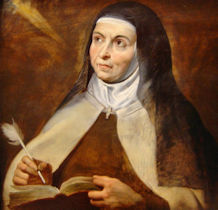 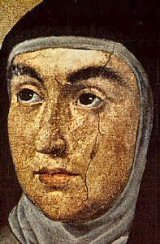 Patron: sickness; against headaches; against heart disease; lacemakers; loss of parents; opposition of Church authorities; those in need of grace; religious; those ridiculed for their piety; Spain; those named Teresa, Theresa, Teresita, Terry, Tessa, Teresina, and Tracy.Symbols: nun in habit of a Discalced Carmelite; Carmelite nun with her heart pierced by an arrow held by an angel; Carmelite nun holding a pierced heart, book and crucifix; Carmelite nun with book and quill; Carmelite nun receiving a message from a dove; roses and lilies; inflamed heart; IHS on a heart; flaming arrows; dove; book and pen; crown of thorns; heart transfixed with flaming arrows; scapulary; crucifix and lily.Things to Do:
Find us on Social Media.