St. Gertrude, a Benedictine nun of the monastery of Helfta, in Saxony, is one of the great mystics of the Middle Ages. She was favored by visions of our Savior and has left a marvelous account of them in a book which she called Revelations. St. Gertrude introduced the devotion to the Sacred Heart which, four centuries later, St. Margaret Mary spread throughout the Church. She died at the beginning of the thirteenth century.According to the 1962 Missal of St. John XXIII the Extraordinary Form of the Roman Rite, June 10 is the feast day of St. Margaret of Scotland.

Queen Margaret of Scotland is the secondary patroness of Scotland. Margaret's copy of the Gospels is preserved in the Bodleian Library at Oxford University.Patron: Death of children; large families; learning; queens; Scotland; widows.Symbols: Black cross; scepter and book; hospital.
Often portrayed as: queen, often carrying a black cross, dispensing gifts to the poor.Things to Do:

In spite of much ill-health, Gertrude used her exceptional natural talents well, knew Latin fluently. When she was twenty-five years old (1281), Christ began to appear to her and to disclose to her the secrets of mystical union. Obeying a divine wish, she put into writing the favors of grace bestowed upon her. Her most important work, Legatus Divinae Pietatis, "The Herald of Divine Love," is distinguished for theological profundity, sublime poetry, and unusual clarity. How it stimulates love of God can be felt only by reading it; Abbot Blosius is said to have read it twelve times each year. St. Gertrude died in 1302, more consumed by the fire of God's love than by fever. —Excerpted from The Church's Year of Grace, Pius ParschPatron: Nuns; travelers; West Indies.Symbols: Crown; lily; taper; seven rings; heart with IHS; heart.Things to Do: 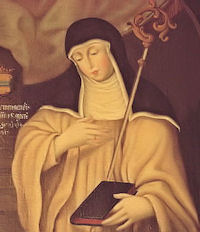 Though constantly subject to physical suffering, Mechtilde was ever intent upon joyfully singing the divine praises, and such is the key-note of the Book of Special Grace, in which St Gertrude and another sister-nun secretly (initially) set down the supernatural favors which God granted to Mechtilde.In his revelations Our Lord used to address her as his “Nightingale”, and he favored her with such spiritual insight and mystical experiences that learned Dominicans were sent to consult her on spiritual matters. Through these Friar Preachers Mechtilde’s book of revelations was widely distributed after her death. Incidentally, the book is structured on the ecclesiastical year; it is liturgical, Trinitarian and Christo-centric. It was, according to Boccaccio, very popular in Florence in Dante’s time under the title of the Lauds of Donna Matilda and devout Florentines used to recite divine praises from the book during devotions at family shrines.Together with St Gertrude the Great, St Mechtilde is one of the first to have stressed on devotion to the Sacred Heart of Jesus. “When you awake in the morning, let your first act be to salute my Heart and to offer me your own,” our Lord once urged Mechtilde.St Mechtilde breathed her last at the Helfta monastery on November 19, 1298.—Excerpted from Feast of All SaintsThings to Do:
Find us on Social Media.