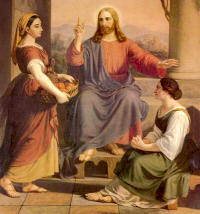 The Lord said to her in reply, "Martha, Martha, you are anxious and worried about many things. There is need of only one thing. Mary has chosen the better part and it will not be taken from her (Luke 10:41-42)."

Sunday Readings
The first reading is taken from the book of Genesis, 18:1-10a. For today's reading we join Abraham shortly after his name change. It was with Abram becoming Abraham, the father of all nations, at the making of the second covenant, that men and women began to rely upon God in faith and are changed by it. God promises Abraham that within the year his aged wife, Sarah, will have a son. Abraham's reaction is to laugh. Immediately following today's reading, Sarah laughs at the news (Gen 18:12). The child born was named Isaac, which means "laughter".

The second reading is from the letter of Paul to the Colossians, 1:24-28. Last week Paul used the occasion to answer the Judaizers and remind them of the absolute supremacy of Jesus Christ. Today Paul tells us his role in proclaiming the gospel. "Now I rejoice in my sufferings for your sake, and in my flesh I am filling up what is lacking in the afflictions of Christ on behalf of his body, which is the church."The Gospel is from St. Luke, 10:38-42 and recounts the familiar story of Martha and Mary. St Augustine comments on this scene as follows: "Martha, who was arranging and preparing the Lord's meal, was busy doing many things, whereas Mary preferred to find her meal in what the Lord was saying. In a way she deserted her sister, who was very busy, and sat herself down at Jesus' feet and just listened to his words. She was faithfully obeying what the Psalm said: 'Be still, and know that I am God' (Ps 46:10). Martha was getting annoyed, Mary was feasting; the former coping with many things, the latter concentrating on one. Both occupations were good" (Sermon 103).Martha has come to be, as it were, the symbol of the active life, and Mary that of the contemplative life. However, for most Christians, called as they are to sanctify themselves in the middle of the world, action and contemplation cannot be regarded as two opposite ways of practicing the Christian faith: an active life forgetful of union with God is useless and barren; but an apparent life of prayer which shows no concern for apostolate and the sanctification of ordinary things also fails to please God. The key lies in being able to combine these two lives, without either harming the other. Close union between action and contemplation can be achieved in very different ways, depending on the specific vocation each person is given by God. Excerpted from The Navarre Bible - St. Luke