O God, restorer and lover of innocence, direct the hearts of your servants towards yourself, that those you have set free from the darkness of unbelief may never stray from the light of your truth. Through our Lord Jesus Christ, your Son, who lives and reigns with you in the unity of the Holy Spirit, one God, for ever and ever.

According to the 1962 Missal of St. John XXIII the Extraordinary Form of the Roman Rite, today is the feast of St. John before the Latin Gate. A tradition mentioned by St. Jerome, which goes back to the second century, says St. John the Apostle was taken to Rome under the Emperor Domitian and plunged into a cauldron of boiling oil; by a striking miracle he came out safe and sound from this torture. A church dedicated in honor of St. John was built near the Latin Gate, the spot referred to by the tradition.


St. John before the Latin Gate
One day Salome presented her two sons, James and John, to Jesus, and with a mother’s ambition asked Him to grant them the highest places in his Kingdom. In reply, the Savior spoke of the chalice which He Himself would have to drink, and foretold that these two disciples would also drink of it. The elder, James the Great, was the first to give his Master this proof of his love. John, the younger brother, offered his life in testimony of Jesus’ divinity.

But the martyrdom of the latter Apostle called for a scene worthy of the event. Asia Minor, which his zeal had evangelized, was not a sufficiently glorious land for such a combat. Rome, whither Peter had transferred his Chair and where he died on his cross, and where Paul had bowed down his venerable head beneath the sword, alone deserved the honor of seeing the beloved disciple march on to martyrdom, with that dignity and sweetness which are the characteristics of this veteran of the Apostolic College. In the year 95 John appeared before the tribunal of pagan Rome. He was convicted of having propagated, in a vast province of the Empire, the worship of a Jew who had been crucified under Pontius Pilate. He was considered a superstitious and rebellious old man, and it was time to rid Asia of his presence. He was, therefore, sentenced to an ignominious and cruel death. A huge cauldron of boiling oil was prepared in front of the Latin Gate. The sentence ordered that the preacher of Christ be plunged into this bath. The hour had come for the second son of Salome to partake of his Master’s chalice. John’s heart leapt with joy. After cruelly scourging him, the executioners seized the old man, and threw him into the cauldron. But, lo! the boiling liquid lost all its heat; the Apostle felt no scalding. On the contrary, when they took him out again he felt all the vigor of his youthful years restored to him. The praetor’s cruelty was foiled, and John, a martyr in desire, was to be left to the Church for some few years longer. An imperial decree banished him to the rugged Isle of Patmos, where God revealed to him the future of the Church even to the end of time. — Excerpted from The Liturgical Year, Abbot Gueranger O.S.B. 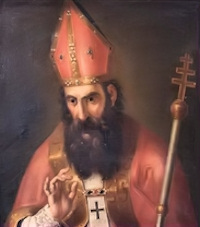 The first Bishop of Antioch after St. Peter. Eusebius mentions him thus in his "History": "And Evodius having been established the first [bishop] of the Antiochians, Ignatius flourished at this time" (III, 22). The time referred to is that of Clement of Rome and Trajan, of whom Eusebius has just spoken. Harnack has shown (after discarding an earlier theory of his own) Eusebius possessed a list of the bishops of Antioch which did not give their dates, and that he was obliged to synchronize them roughly with the popes. It seems certain that he took the three episcopal lists of Rome, Alexandria, and Antioch from the "Chronography" which Julius Africanus published in 221. The "Chronicle of Eusebius" is lost; but in Jerome's translation of it we find in three successive years the three entries that Peter, having founded the Church of Antioch, is sent to Rome, where he perseveres as bishop for 25 years; that Mark, the interpreter of Peter, preaches Christ in Egypt and Alexandria; and
that Evodius is ordained first Bishop of Antioch.

This last year is given as Claudius III by the Codex Freherianus, but by the fifth-century Bodleian Codex (not used in Schoene's edition) and the rest as Claudius IV (A.D. 44). The Armenian translation has Claudius II. We have no mention of Evodius earlier than that by Africanus; but the latter is confirmed by his contemporary, Origen, who calls Ignatius the second bishop after Peter (Hom. IV, in Luc., III, 938A). It is curious that the ordination of Evodius should not have been given in the "Chronography" in the same year as the founding of the Antiochian Church by Peter, and Hort supposed that the three entries must have belonged to a single year in Eusebius. But the evidence is not in favour of this simplification. The year of the accession of Ignatius, that is of the death of Evodius, was unknown to Eusebius, for he merely places it in the "Chronicle" together with the death of Peter and the accession of Linus at Rome (Nero 14-68), while in the "History" he mentions it at the beginning of Trajan's reign.The fame of Ignatius has caused later writers, such as Athanasius and Chrysostom, to speak of him as though he were the immediate successor of the Apostles. Jerome (Illustrious Men 16) and Socrates (H.E. VI, 8) call him the "third" bishop after St. Peter, but this is only because they illogically include Peter among his own successors. Theodoret and Pseudo-Ignatius represent Ignatius as consecrated by Peter. The difficulty which thus arose about Evodius was solved in the Apostolic Constitutions by stating that Evodius was ordained by Peter and Ignatius by Paul. The Byzantine chronographer, John Malalas (X, 252), relates that as Peter went to Rome, and passed through the great city of Antioch, it happened that Evodus (sic), the bishop and patriarch, died, and Ignatius succeeded him, he attributes to Evodius the invention of the name Christian. Salmon does not seem to be justified in supposing that Malalas ascribes any of this information to Theophilus, the second century Bishop of Antioch. We may be sure that Evodius is an historical personage, and really the predecessor of St. Ignatius. But the dates of his ordination and death are quite uncertain. No early witness makes him a martyr.The Greeks commemorate together "Evodus" and Onesiphorus (2 Timothy 1:16) as of the seventy disciples and as martyrs on 29 April, and also on 7 September. Evodius was unknown to the earlier Western martyrologies the Hieronymian, and those of Bede and Florus; but Ado introduced him into the so-called "Martyrologium Romanum parvum" (which he forged not long before 860) and into his own work, on 6 May. His source was Pseudo-Ignatius, whom he quotes in the "Libellus de fest. Apost.", prefixed to the martyrology proper. From him the notice came to Usuard and the rest, and to the present Roman Martyrology. Excerpted from the Catholic EncyclopediaThings to Do:
Stay in Touch!