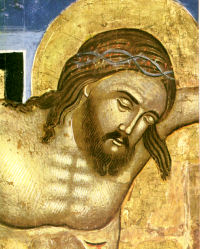 Today's Station is at St. Nicholas in Prison. It was constructed in the ruins of two temples and the ancient Forum Olitorium, and you can see fragments from them reused in the church. The most important of the temples was the Temple og Piety, built by Acilius Glabrius, consul in 191 B.C. The dedication to St. Nicholas was made by the Greek population in the area.