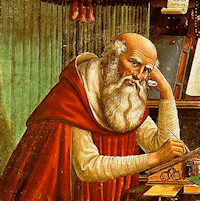 According to the 1962 Missal of St. John XXIII the Extraordinary Form of the Roman Rite, today is the feast of St. Sylvester. He was the son of a lawyer and had also studied law before becoming a canon in his native town of Osimo. He was a zealous and fervent priest. His determination to retire into solitude was caused by the sight of the decomposing corpse of a friend. He at first lived as a hermit at Grotta Fucile, and then on Monte Fano where followers came to join him. He gave them the habit and Rule of St. Benedict together with certain other customs which reflect his own aspirations and the devotional tendencies of his day. He died in 1267 at the age of ninety.

It is also the commemoration of St. Peter, Bishop of Alexandria, who was beheaded on November 25, 311, during Maximinus Daia's persecution. He was a great bishop, famous for wisdom and holiness; "a model of charity and zeal, severe towards himself, merciful to sinners, a divine model of the Christian teacher," says Eusebius.Historically today the feasts of St. John Berchmans, priest and St. Leonard of Port Maurice, priest are celebrated. 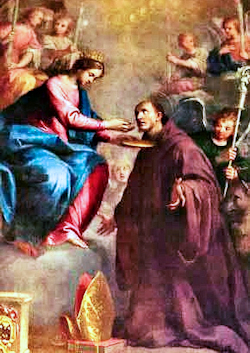 Sylvester, of the noble Gozzolini family, was born in Italy in 1177. After making a distinguished record at the universities of Bologna and Padua, he was made a canon at Osimo, his native city. His inclination toward the contemplative life was strengthened by the sight of the dead body of a once handsome relative. "I am what he was," said Sylvester to himself, "and I will also be what he is."

After the funeral services, the words of our Lord kept ringing in his ears, "If anyone wishes to come after Me, let him deny himself, and take up his cross and follow Me" (Matt. 16:24). At the age of 50 he resigned his post and became a hermit. Many disciples came to him, and these he organized under the rule of St. Benedict. After his death the order became known as the Sylvestrines, especially noted for their spirit of poverty. Their founder died at the age of 90.The members of his Order wear a Benedictine habit, Turkish blue in color. Today there remain seven Sylvestrine monasteries in Italy and several mission houses in Ceylon and in the United States. Dom Gueranger writes on the significance of St. Sylvester: "God often brings the world to those who flee from it, as Sylvester Gozzolini among others experienced. In the thirteenth century, the world, all in admiration at the sanctity and the eloquence of the new Orders, seemed to have forgotten the monks and the desert. God, who never forgets, led his elect silently into solitude, and the wilderness began again to rejoice and flourish like the lily; strength was restored to the weak hands and feeble knees of the sons of the cloister. The austerities of olden days and the fervor of prolonged prayer were revived at Monte Fano, and extended into sixty other monasteries; the new religious family of the Sylvestrians was approved by Innocent IV in 1247. Though originated seven centuries after St. Benedict, and distinguished from the elder families by its blue habit, it claims the Patriarch of Cassino for its legislator and father."Excerpted from The Church's Year of Grace by Fr. Pius Parsch. 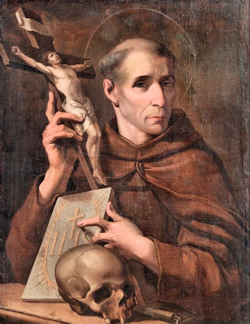 St. Leonard was born on December 20, 1676 in Porto Maurizio, Italy. He was given the name Paul Jerome Casanova by his father, Domenico Casanova, a sea captain, and his mother, Anna Maria Benza.

When he was 13, he was placed with his uncle Agostino to study for a career as a physician, but when the boy decided against medicine, his uncle disowned him. He then began to study at the Jesuit College in Rome.On October 2, 1697, he joined the Franciscans of the Strict Observance and took the name Brother Leonard. He was ordained in Rome in 1703. He taught for a while, and expected to become a missionary in China, but a bleeding ulcer kept him in his native Porto Maurizio for the four years it took for him to recover and regain his strength.In 1709, St. Leonard of Port Maurice was sent to Florence where he preached in the city and nearby region. A great preacher, he was often invited to visit and preach in other areas. He worked to increase devotion to the Blessed Sacrament, Sacred Heart, Immaculate Conception, and the Stations of the Cross.One of his accomplishments was to set up the Stations of the Cross in over 500 different places, including the Colosseum. He was sent as a missionary to Corsica by Pope Benedict XIV in 1744 and restored discipline to the holy orders there, but local politics greatly limited his success in preaching.He returned to Rome exhausted, and died that night on November 26, 1751 at the monastery of Saint Bonaventure in Rome.From St. Leonard of Port Maurice, a Modern Catholic can find an example of great servitude and spiritual stamina. One may look at how he lived his life with Christian perseverance, always seeking out opportunities to build the Kingdom of God, until his death.Excerpted from Catholic News Agency
Roman Station Churches of Advent and Christmas

First Sunday of Advent
Station with Santa Maria Maggiore (St. Mary Major):
We enter the house of God. Mary, God's Mother, is preparing the crib in which to lay her Son; she comes to meet us. What a beautiful model of preparation! The stational church is St. Mary Major at the Crib and its stational Saint meets us! Already on this first day of preparation for Christmas, we see the Mother of God at the crib! Mary now leads us to the altar, where she speaks to us and leads us in prayer. We ask our blessed Mother Mary, the fruitful earth fecundated by the goodness of the Lord, the patroness on the first day of the New Year as well as on this first day of Advent, to obtain for us the grace to prepare with becoming honor for the approaching solemnity of our redemption. Mary is the highest expression, the perfect model of true Advent spirit. On this account do we begin our Advent observance in the great Marian Church Ad praesepe, at the crib. To the Christians of Rome this church was Bethlehem. In 342 A.D. it was built to commemorate the Council of Ephesus, and dedicated to the Mother of God. Our best model for the Advent-Christmas season is, surely, Mary our Mother (adapted from Pius Parsch, OSB, The Church's Year of Grace and Martin Hellriegel, Vine and Branches).
Vatican Info: Santa Maria Maggiore
Churches of Rome Info: Basilica of Santa Maria Maggiore
Rome Art Lover: Basilica Santa Maria Maggiore