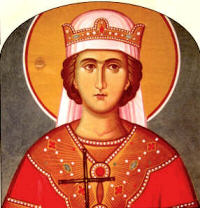 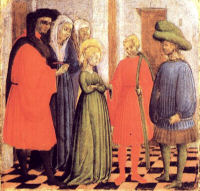 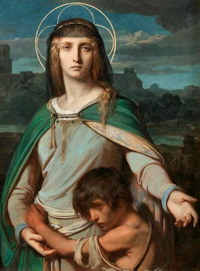 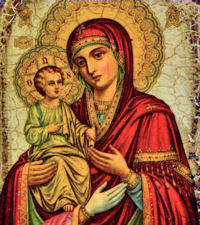 Our Lady appeared to him and prevented him from taking such a step as he had planned. "Do not be sad and cast down, my son," she said, "because you are no longer permitted to place wreaths of flowers on my statue. I shall teach you to change this pious practice into one that will be far more pleasing to me and more meritorious to your soul. In place of the flowers that soon wither and cannot always be found, you can weave for me a crown from the flowers of your prayers that will always remain fresh and can always be had." When Our Lady had disappeared, the overjoyed Novice at once began to recite the prayers in honor of her Seven Joys, as she had directed. While he was deeply engrossed in this devotion, the Novice Master happened to pass by and saw an angel weaving a marvelous wreath of roses. After every tenth rose, he inserted a golden lily. When the wreath was finished, the angel placed it on the head of the praying Novice. The Novice Master demanded the Novice tell him the meaning of this vision. The joyful Novice complied. The good priest was so impressed that he immediately made it known to his brethren. Thus, the practice of reciting the Franciscan Crown of Our Lady's Joys soon spread as a favorite devotion of the Friars. The Joys of Mary remembered in the devotion are these:Excerpted from The Franciscan Order of the Divine CompassionThings to Do: