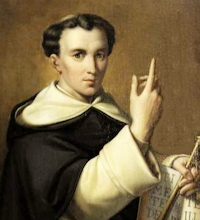 O God, who raised up the Priest Saint Vincent Ferrer to minister by the preaching of the Gospel, grant, we pray, that, when the Judge comes, whom Saint Vincent proclaimed on earth, we may be among those blessed to behold him reigning in heaven. Who lives and reigns with you in the unity of the Holy Spirit, God, for ever and ever. 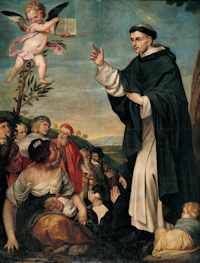 St. Vincent Ferrer's father was an Englishman, who had been knighted at the siege of the city. On February 5th, 1367, having completed his studies in philosophy, he became a Dominican. He was moved to Barcelona in the next year, and in 1370 became lecturer in philosophy at the Dominican house in Lerida. In 1373, when he returned to Barcelona to the 'Studium Arabicum et Hebraicum', he was already a famous public preacher.

In 1377 he was sent to Toulouse for further study; there he attracted the attention of the Legate of the future Avignon antipope, Cardinal Pedro de Luna, whose suite he joined, being himself a strong advocate of the claims of the Avignon popes as against those of Rome. He preached a great deal, particularly to Jews and Moors, and converted a rabbi of Valladolid, who, later became Bishop Paul of Burgos, and associated with St. Vincent in his strenuous and successful attempts to convert the Jews of Spain. Disillusioned in his attempts to heal the schism between Rome and Avignon, St. Vincent saw a vision of our Lord standing between St. Dominic and St. Francis, commissioning him directly to go about preaching penance. He was released by Benedict XIII in November 1399 to do this, and continued his preaching and wandering throughout western Europe until his death, being followed by a crowd of penitents and flagellants which varied from 300 to 10,000. He was in Aragon when the throne became vacant and with his brother, Boniface, a Carthusian, was instrumental in choosing Ferdinand of Castille as prince. In 1416 he withdrew his own allegiance and that of the kingdom of Aragon from Benedict XIII, because the Avignon antipope had made no serious attempt to heal the schism and had refused the request made by the council of Constance that he should resign in order to make possible a new and undisputed election to the papacy. St. Vincent's decision had the effect of deposing Benedict and of making possible an end to the schism. St. Vincent died on April 5th, 1419, at Vannes in Brittany, where his relics are venerated. He was canonized by Pope Calixtus II in 1455. —Excerpted from The Saints edited by John Coulson Patron: Brick makers, builders construction workers, pavement workers, plumbers, tile makers.Symbols: Dominican holding an open book while preaching; Dominican with a cardinal's hat; Dominican with wings; cardinal's hat; pulpit; trumpet; Dominican with a crucifix; Dominican preacher with a flame on his head; flame; Dominican preacher with a flame on his hand.Things to Do: 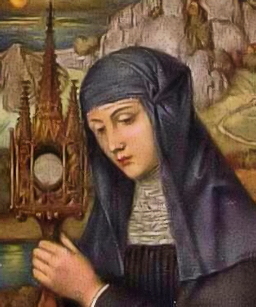 St. Juliana is little known but the Church is deeply indebted to her, not only because of the holiness of her life but also because, with her great fervour, she contributed to the institution of one of the most important solemn Liturgies of the year: Corpus Christi.

She is St Juliana de Cornillon, also known as St Juliana of Liège. We know several facts about her life, mainly from a Biography that was probably written by a contemporary cleric; it is a collection of various testimonies of people who were directly acquainted with the Saint.Juliana was born near Liège, Belgium between 1191 and 1192. It is important to emphasize this place because at that time the Diocese of Liège was, so to speak, a true “Eucharistic Upper Room”. Before Juliana, eminent theologians had illustrated the supreme value of the Sacrament of the Eucharist and, again in Liège, there were groups of women generously dedicated to Eucharistic worship and to fervent communion. Guided by exemplary priests, they lived together, devoting themselves to prayer and to charitable works.Orphaned at the age of five, Juliana, together with her sister Agnes, was entrusted to the care of the Augustinian nuns at the convent and leprosarium of Mont-Cornillon.She was taught mainly by a sister called “Sapienza” [wisdom], who was in charge of her spiritual development to the time Juliana received the religious habit and thus became an Augustinian nun.She became so learned that she could read the words of the Church Fathers, of St Augustine and St Bernard in particular, in Latin. In addition to a keen intelligence, Juliana showed a special propensity for contemplation from the outset. She had a profound sense of Christ’s presence, which she experienced by living the Sacrament of the Eucharist especially intensely and by pausing frequently to meditate upon Jesus’ words: “And lo, I am with you always, to the close of the age” (Mt 28:20). 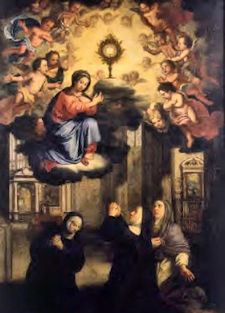 When Juliana was 16 she had her first vision which recurred subsequently several times during her Eucharistic adoration. Her vision presented the moon in its full splendour, crossed diametrically by a dark stripe. The Lord made her understand the meaning of what had appeared to her. The moon symbolized the life of the Church on earth, the opaque line, on the other hand, represented the absence of a liturgical feast for whose institution Juliana was asked to plead effectively: namely, a feast in which believers would be able to adore the Eucharist so as to increase in faith, to advance in the practice of the virtues and to make reparation for offences to the Most Holy Sacrament.Juliana, who in the meantime had become Prioress of the convent, kept this revelation that had filled her heart with joy a secret for about 20 years. She then confided it to two other fervent adorers of the Eucharist, Blessed Eva, who lived as a hermit, and Isabella, who had joined her at the Monastery of Mont-Cornillon. The three women established a sort of “spiritual alliance” for the purpose of glorifying the Most Holy Sacrament.They also chose to involve a highly regarded Priest, John of Lausanne, who was a canon of the Church of St Martin in Liège. They asked him to consult theologians and clerics on what was important to them. Their affirmative response was encouraging.What happened to Juliana of Cornillon occurs frequently in the lives of Saints. To have confirmation that an inspiration comes from God it is always necessary to be immersed in prayer to wait patiently, to seek friendship and exchanges with other good souls and to submit all things to the judgement of the Pastors of the Church.It was in fact Bishop Robert Torote, Liège who, after initial hesitation, accepted the proposal of Juliana and her companions and first introduced the Solemnity of Corpus Christi in his diocese. Later other Bishops following his example instituted this Feast in the territories entrusted to their pastoral care.However, to increase their faith the Lord often asks Saints to sustain trials. This also happened to Juliana who had to bear the harsh opposition of certain members of the clergy and even of the superior on whom her monastery depended.Of her own free will, therefore, Juliana left the Convent of Mont-Cornillon with several companions. For 10 years — from 1248 to 1258 — she stayed as a guest at various monasteries of Cistercian sisters.She edified all with her humility, she had no words of criticism or reproach for her adversaries and continued zealously to spread Eucharistic worship.She died at Fosses-La-Ville, Belgium, in 1258. In the cell where she lay the Blessed Sacrament was exposed and, according to her biographer’s account, Juliana died contemplating with a last effusion to love Jesus in the Eucharist whom she had always loved, honoured and adored. Jacques Pantaléon of Troyes was also won over to the good cause of the Feast of Corpus Christi during his ministry as Archdeacon in Lièges. It was he who, having become Pope with the name of Urban iv in 1264, instituted the Solemnity of Corpus Christi on the Thursday after Pentecost as a feast of precept for the universal Church.—Excerpted from Pope Benedict XVI General Audience of November 17, 2010

Tuesday of the 5th Week of Lent
Station with Santa Maria in via Lata al Corso (Our Lady at Via Lata):
The Station in Rome was formerly the church of the martyr St. Cyriacus, and as such it is still given in the Roman missal; but this holy sanctuary having been destroyed, and the relics of the holy deacon translated to the church of St. Mary in Via lata, it is here that the Station is now held.